Brooks Koepka's unhappiness will reportedly be laid bare in the upcoming Netflix documentary Full Swing, according to a producer who worked on the show. 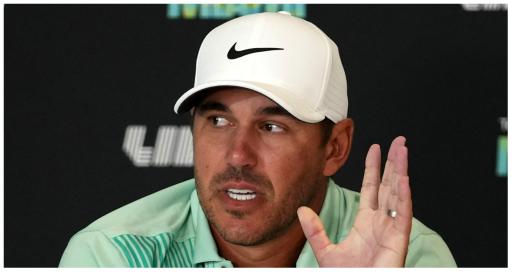 Brooks Koepka's struggles will be laid bare in the upcoming Netflix documentary, according to one of the show's producers.

Paul Martin has given an interview with GQ about Full Swing.

Martin told the publication that Koepka was a particularly interesting watch in the show.

Listen to the new GolfMagic podcast

Television producers met with Koepka in the Bahamas in late 2021.

At this time Koepka, now 32, was battling with his mind and swing. Injuries had reduced him to a shadow of his former self.

You might remember that in September 2021, Koepka gave a wide-ranging interview to Golf Digest in which he made the claim he believed he could win as many major championships as Tiger Woods.

"People misconstrue that as being cocky. No, that's just my belief. If I don't have that belief, I shouldn't be out there. If you don't think you can win, why the hell are you teeing it up?"

Koepka was a key target for the breakaway tour, although he publicly he expressed reservations about joining Greg Norman et al.

But according to Martin, Koepka was particularly unguarded at this point.

He didn't want to talk about it. But then he began to open up.

"He started to talk about this vulnerability – where he really was, and how he was waking up in the middle of the night."

Martin said at one point we will see Koepka unable to discuss his wedding plans to Jena Sims without glazing over and obsessing about his golf swing.

"We see Brooks really struggling to come to terms with the fact that he's, frankly, not playing as well as he was two, three years ago, and doesn't quite know how to get a grip on stuff."

It certainly sounds as if we will truly see a different side of Koepka in Full Swing.

Let's hope the show is all it's cracked up to be.

Koepka officially joined LIV Golf in June 2022, only a week after accusing the media of casting "a black cloud" over the U.S. Open.