Greg Norman left red-faced after LIV Golf REVELATION: "Sounds like M-BS to me!"

Greg Norman's past comments about LIV Golf have been re-shared in light of a revelation made in court by the PGA Tour's counsel. 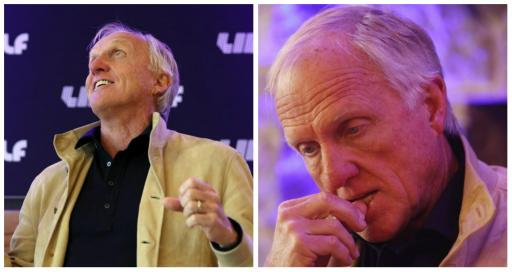 He caused quite a stir and it's fair to say things didn't go quite as planned as he made one almighty gaffe when laying out plans for the Saudi-backed LIV Golf League.

The 67-year-old two-time Open champion attempted to brush off questions about the murder of dissident journalist Jamal Khashoggi by saying "we've all made mistakes".

The CIA have claimed Mohammed bin Salman, the Saudi crown prince and chairman of their vast wealth fund - PIF - sanctioned his killing.

Later as part of that media day at Centurion, Norman then told Sky Sports' Jamie Weir that LIV Golf was "100 per cent independent" from the crown prince.

On 13 January, court documents revealed the aforementioned crown prince owns 93 per cent of the league, pays 100 per cent of their costs and holds all of the entity's financial risk.

The revelation - if you can call it that - was reportedly inadvertently revealed in court by Elliot Peters, who is the lead counsel for the PGA Tour in their ongoing lawsuit against LIV.

Some golf fans saw the humour in this. One wrote: "That's a bit awkward." Another added: "Sounds like M-BS to me."

The news has been leapt upon by an organisation set up by supporters of Khashoggi - Democracy for the Arab World Now - who are also calling for former U.S. President Donald Trump to be investigated over his links to LIV Golf.

Trump has been criticised for hosting a number of LIV events at his resorts, including a $50m event at Trump National Doral.

Leah Whitson, the executive director of DAWN, said in a statement:

"The revelation that a fund controlled by Crown Prince MBS actually owns almost all of LIV Golf means that MBS has been paying Donald Trump unknown millions for the past two years, via their mutual corporate covers.
"The national security implications of payments from a grotesquely abusive foreign dictator to a president of the United States who provided extraordinary favours to him are as dangerous as they are shocking."

"Former President Trump made no secret of the endless favours he granted MBS and Saudi Arabia during his term in office, from his first state visit to the country, to vetoing legislation that would have banned arms sales to the country, to protecting MBS by hiding the CIA's report concluding MBS ordered Jamal Khashoggi's murder."