talkSPORT co-host Simon Jordan hits out at Phil Mickelson and other Saudi golf rebels after listening to their comments about bringing golf to the world. 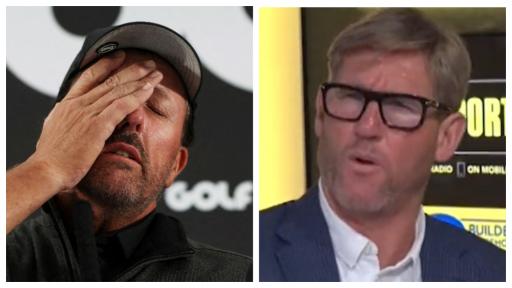 talkSPORT co-host Simon Jordan has branded Phil Mickelson "a liar" following the comments he made during his press conference ahead of this week's Saudi-funded LIV Golf Invitational Series opening event at Centurion Club in St Albans, England.

Jordan, who co-hosts a regular show with Jim White on the popular radio sports service, is fed up of listening to Mickelson and all the other Saudi golf rebels talk about bringing the game of golf to the world.

"I don’t necessarily agree with your premise," Mickelson told reporters when the subject of his $200 million offer was brought to the fore as the main reason why he has joined the LIV Golf movement.

"But I think the opportunity that it provides to play, compete, bring the sport throughout the world, play less, have a better balance in life on and off the golf course...

"I know it gives me a lot of positives personally and professionally and I believe it does the same for everyone else in the field."

“This is about nothing more and more nothing less than money!”

“It’s not about brand representation or bringing culture changes!”

Simon Jordan says the golfers joining the LIV Golf event need to be open and honest about their motivations. pic.twitter.com/bdW9NcLHlA

Jordan - like many other critics of LIV Golf - could not believe what he was hearing from golf's oldest major champion who has been paid $200 million to take part in Greg Norman's controversial circuit.

"I think he’s a liar. You either agree or disagree," Jordan said of Mickelson's latest comments during his White & Jordan radio show on talkSPORT.

"Here’s a very simple answer to the question: I’m going to this golf tour for the money.

"Have the courage of your convictions. All this claptrap about how they’re bringing it to the world."

Jordan added: "None of these players are going anywhere for anything else other than the outlandish amount of money that is being paid. This about nothing more and nothing less than money.

"This is about money. That’s fine. Just say it.

"Let’s rephrase the question. You are here for one thing and one thing only: money."

Mickelson caused shock waves in the sport earlier this year when be labelled the Saudi regime as "scary motherf*****s" while making it clear he was only signing up to the Saudi golf league because he wanted to use it as "leverage" against the PGA Tour.

Lefty took four months out of the sport as a result of his comments and he is now making his first competitive start this week since a tie for 18th at the Saudi International back in February.

Dustin Johnson, who has gone even further than Mickelson by resigning from the PGA Tour, has been given $150 million to play in the LIV Golf Invitational Series.

Other star names teeing it up in the LIV Golf London event this week include Sergio Garcia, who has also resigned his PGA Tour membership, Ian Poulter, Lee Westwood and Louis Oosthuizen.

Bryson DeChambeau has also signed up for the second LIV Golf event in Portland at the end of the month.