GolfMagic took a look around the LIV Golf Fan Experience at Centurion Golf Club which features attractions such as the Chipping Challenge and the Mega Putt. 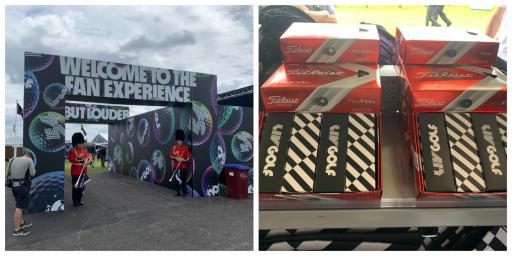 Other than the bags and bags of millions given to the players at the LIV Golf Invitational Series, the other key selling point of the breakaway tour is providing the fans with a new and exciting experience.

Heinous amounts of money may have been pumped into the likes of Phil Mickelson and Dustin Johnson's bank accounts, but it is clear they have heavily invested in fan attractions and entertainment.

The front entrance of the Fan Experience is guarded by men dressed as Royal Guards (I suspect they aren't actually the Royal Guards). It is worth noting that this event is not in London.

As you walk in, the main bar is located immediately to your right. The colour is almost as if you've arrived at a Junkyard Golf/Ghetto Golf venue.

There is certainly a lot going on once you walk through the fan area. One of the first things that will catch your eye is the mini-golf course.

Related: Paul Casey FORCED OUT of third major of year at US Open

The twist with this that separates it from other mini-golf courses is the use of hickory clubs and course attendants are dressed like early 20th century golfers.

With the gates having been open for just under an hour (having opened at 11 am), the mini-golf course was fairly busy. To the left of it, you have the LIV Golf merchandise shop.

If you want a black cap with the LIV Golf 'L' on the front, it will set you back £30. If you want the full LIV Golf logo on the front, that will be £35. To put this into context, the most expensive cap on Nike's website is the Nike Dri-FIT Tiger Woods Legacy91 at £32.95.

One part of the shop wall is dedicated to headcovers and interestingly, there were Titleist Pro V1 golf balls for sale with the LIV Golf logo on the side (£15 a sleeve).

There was a little tent with an arcade inside and also a face-painting station. There is also the Chipping Challenge that features a large bunker and green above it. There are three hitting nets on the right-hand side too.

If anyone holes the Mega Putt here this week, I would be absolutely shocked… #LIVGolf pic.twitter.com/UUppV8jLYy

In terms of difficulty, this is in no way as hard as the Mega Putt. I walked over to watch one man's attempt. I would be absolutely shocked if any fan holed the Mega Putt all week.

I asked one punter how long it was but they didn't know. Even if you hole it, you are entered into a random draw for the chance to go to the season-ending LIV Golf team championship at Doral in Miami.

If you walk through the Fan Experience to the end, you will find the entrance to what appears to be the concert area where the likes of Jessie J, Craig David and James Morrison will be performing this week.

It will certainly be interesting to see how many people will be in attendance later when James Morrison and James Bay enter the stage at 8 pm.

Next Page: LIV Golf: Struggling to understand the drama? Watch this explainer...