The author who wrote the explosive biography about Phil Mickelson claims Lefty is now "unburdened". 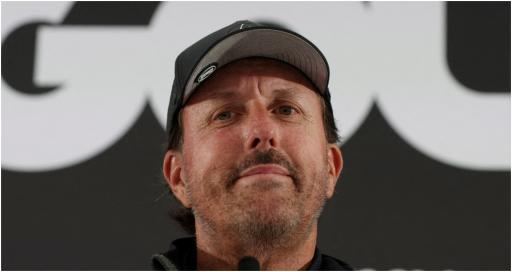 Phil Mickelson returned to the golf world this week after going all-in on the Saudi-backed LIV Golf Invitational Series.

Related: Why Phil Mickelson asked a young reporter to "throw the first punch"

Mickelson, 51, faced the media for more than 45 minutes where he was grilled on human rights violations, the PGA Tour, his gambling and what he has been doing for the last few months.

Lefty confirmed that his gambling, which he described as "recklesss" and "embarrassing" got to the point where his financial security could have been in serious jeopardy.

As you are probably acutely aware, Mickelson decided to take a four-month break from the game after his comments about working with the Saudis to force the PGA Tour into change went public.

The person who published those comments was the author and journalist Alan Shipnuck. The former Sports Illustrated reporter, who has covered Lefty's entire career, was just putting the finishing touches on his book when Mickelson revealed all.

Mickelson claimed his comments were "off the record". Shipnuck denies this. Still, it's fair to say that there is no love lost between the pair. The journalist recently joked on The Golfers Journal podcast that he wasn't on the Saudis' Christmas card list.

Still, Shipnuck had an interesting theory about Mickelson.

He told the podcast: "In a weird way, you know, maybe this book and the fallout has set him free. There was always a big divide between the public and the private Phil.

"People in the game knew that. And, this book is kind of a bridge between those two lives and those two personas. It's analogous to Tiger, he was living a lie and his whole life came crashing down.

"I think with Phil, he might be unburdened in some ways. He doesn't have all of the huge corporate obligations just for starters. He's got more time. Now he feels like he's playing for himself and he's kind of reinventing himself.

"By speaking openly and honestly about the gambling, that's probably freeing as well; talking about the therapy. He had kind of turned into a cartoon character.

"He was sort of having a mid-life crisis before our eyes; all the preening about his calf muscles and how far he's hitting his driver. Even, if you look at pictures of Phil 10 years ago, he's got nice salt and pepper hair now it's jet black. It's been interesting to watch this.

What do you make of Phil Mickelson's decision? Has he played his last PGA Tour event? Should the majors intervene? Let us know on our social media channels.