Xander Schauffele has joined a list of elite PGA Tour players to issue a statement about the Saudi Golf League in the wake of Phil Mickelson's comments. 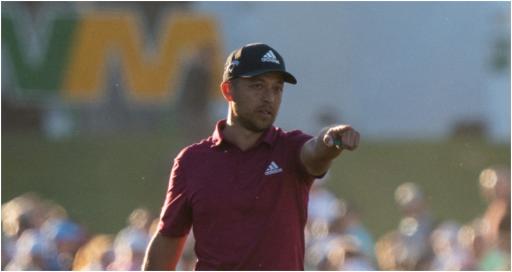 Xander Schauffele has confirmed he was in talks with the Saudi Golf League but believed it wasn't close to a finished product as he declared his allegiance to the PGA Tour.

In a statement released on 23 February, Schauffele also said his team had done their "due diligence" by meeting and discussing the venture with LIV Golf Investments but believed it wasn't close to a finished business model.

Greg Norman is the CEO of LIV Golf Investments, which is receiving money from the sovereign wealth of Saudi Arabia.

They have been feeding money into the Asian Tour and were expected to form a rival, breakaway league in the future.

They have already hosted the Saudi International this year which Schauffele competed in and was won by Harold Varner III.

The Olympic gold medalist suggested that his belief in positive changes regarding prize purses, media rights and transparency with the PGA Tour "never wavered".

Schauffele follows a number of high profile players who were rumoured to be jumping ship to join Norman's Saudi startup league to clarify their futures.

His statement follows a truly extraordinary week in golf after Phil Mickelson's comments about the Saudis were made public.

In a November phone call to a biographer writing a book about Lefty, Mickelson explained why he was working with Norman.

"At no point have I taken any action or made statements to suggest that I would entertain the SGL as an alternative to the PGA Tour.

"Thus it seemed unnecessary to make a statement until now.

"My team had been instructed to do due diligence on this matter, thus we have met and discussed with representatives of SGL/LIV, only to come to the conclusion that the SGL isn't close to a finished product or business model.

"Recent articles containing speculative statements as to where my loyalties fall now indeed require a response. My allegiance to the PGA Tour, my belief in positive changes at the verge of being implemented at the PGA Tour, in particular when it comes to shared intellectual property rights, size of purses and overall transparency, never wavered."

Mickelson suggested that he was okay with working with Norman and the Saudis as it was a chance for him to reshape the PGA Tour.

The 51-year-old has said he desperately needs some time away and announced a break from the game.

It has been rumoured that the PGA Tour have suspended him but officials have not commented on the matter.

Mickelson claimed his comments were "off record", but the writer - Alan Shipnuck - denies this.

Schauffele joins Bryson DeChambeau and Dustin Johnson in making an official statement about where their loyalties are.

Johnson, a former world number one, said last week it was time to put the speculation to bed.

While DeChambeau said that "as of now" he remains dedicated to the PGA Tour and will continue to play where the game's elite are.