How the leaderboard may look for Phil Mickelson in the Saudi Golf League...

This golf meme could show a glimpse into the future if Phil Mickelson decided to play on the controversial Saudi Golf League. 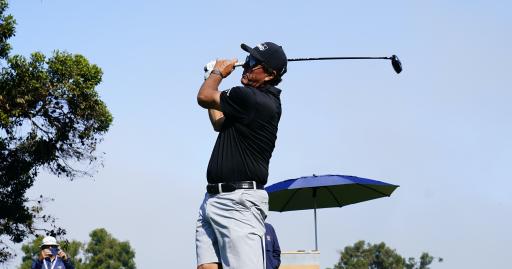 It has been a quite staggering and surreal few days in the life and the career of Phil Mickelson, who is one of the best players to ever pick up a golf club.

Whatever you think of his off-the-record/on-the-record words to Alan Shipnuck and his statement on Tuesday night, Mickelson is on his way to tarnishing his reputation on the PGA Tour.

After supposedly entering into an agreement with the Saudis to gain leverage to improve the PGA Tour, also describing the people he was allegedly working with as "scary motherf***ers," how does he come back from this?

It will certainly be interesting to discover when the six-time major champion returns to his playing career on the PGA Tour. He declared that he needs time off in his statement two days ago.

One that caught our eye was a graphic created that showed Mickelson at the top of the leaderboard of the 2023 Timbuktu Scorched Earth Invitational Limited.

Although the leaderboard shows that Lefty is 4-over-par, he is still leading in a field that shows just nine players, two of which have been disqualified and one player is 40-over-par.

McIlroy described the Saudi golf league as "dead in the water" and perhaps he is right, for now.