A judge has ruled that LIV Golf players Phil Mickelson, Hudson Swafford and Talor Gooch are still subject of discovery in the antitrust lawsuit. 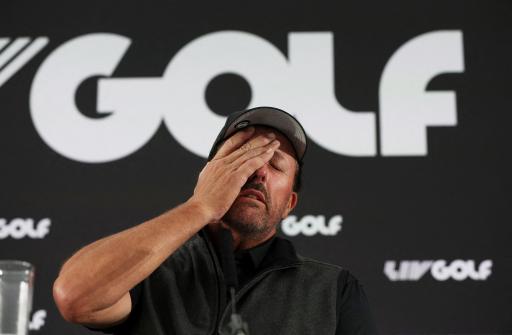 Phil Mickelson may have to give evidence in LIV Golf's antitrust lawsuit against the PGA Tour, after a judge ruled the six-time major champion is still the subject of discovery.

This news was first reported by Rex Hoggard of the Golf Channel.

Hoggard's report outlines that Mickelson, along with Hudson Swafford and Talor Gooch are also still the subject of discovery per judge Susan van Keulen's ruling on Thursday.

Gooch, Mickelson and Swafford were named as plaintiffs when they filed an antitrust lawsuit against the PGA Tour in August along with eight other players.

LIV Golf subsequently added themselves as a plaintiff which prompted Mickelson to drop out.

The only players who are currently still named in the suit are Bryson DeChambeau, Matt Jones and Peter Uihlein.

Related: What did Mickelson do to upset Pat Perez?

DeChambeau, in particular, has claimed the only reason he remains involved in the legal action is because he claims the PGA Tour are withholding half of his Player Impact Program bonus.

He claimed he believed this alleged action was "petty, childish" and showed "emotionally" where the PGA Tour were at.

Per Hoggard's report, the attorneys for Mickelson, Gooch and Swafford had argued against their clients being made subject to discovery.

The judge's ruling also had implications for the DP World Tour and The R&A.

Judge van Keulen has approved three motions to "bridge international boundaries", meaning representatives of the European-based circuit and their chief executive, Keith Pelley, could also be deposed and subject to discovery.

LIV Golf and their commissioner, Greg Norman, have argued that the PGA Tour, R&A and other governing bodies – including those overseeing the majors – are part of an existing ecosystem that have colluded to undermine the Saudi-backed circuit.

The chairman of Augusta National, Fred Ridley, has been accused of approaching players before The Masters and telling them not to join LIV.