Justin Thomas implored LPGA Tour officials to "read the room" as final group were put on the clock with two holes left. 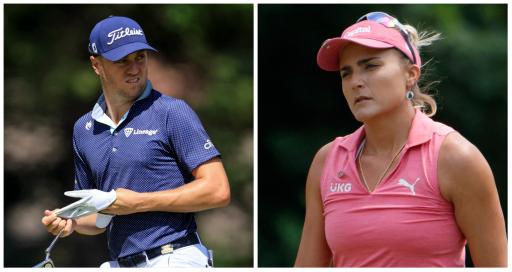 Justin Thomas implored LPGA Tour officials to “read the room” during a dramatic final round of the KPMG Women’s PGA Championship at Congressional.

Once again it was heartache for Lexi Thompson as she threw away a two-stroke lead over the final three holes which allowed In Gee Chun to claim the title.

Thompson’s group was put on the clock with two holes to play. When they did finish, it had taken the three-ball five hours and 45 minutes to play 18 holes.

American Thompson, who has one major to her name, refused to talk with media afterwards. She was also hit with a $2,000 fine. It’s not known if the other players in her group were fined.

I’m all for helping slow play, but putting those ladies on the clock with 2 holes left trying to win a major seems like a good read the room situation and don’t put them on the clock

More: How much they won at Travelers Championship

Thompson agonisingly made bogey in four of her last seven holes, including both the 16th and 17th which left her one stroke behind the winner. She did take home $718,000 for her efforts, mind.

The last time Thompson, 27, won an LPGA Tour event was in 2019. This is now the third major she has failed to convert when coming down the stretch.

During last year’s US Women’s Open, she played her last eight holes in five-over par to miss out on a playoff by one stroke. She was also given a controversial penalty during the 2017 ANA Inspiration.

Thompson did sign autographs after her latest heartbreak and then posted on social media that it “wasn’t the outcome I wanted” but thanked tournament organisers.