Jin Young Ko set the record for consecutive rounds in the 60's on the LPGA Tour in the final round of the HSBC Women's World Championship. 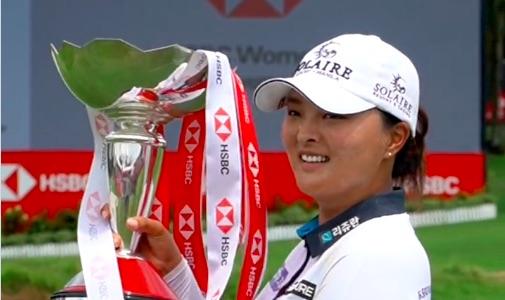 Jin Young Ko continued her dominance of the LPGA Tour by winning yet again at the HSBC Women's World Championship.

Ko fired a final round score of 66 to finish on 17-under-par and set the record for the most consecutive rounds on the LPGA Tour in the 60's of 15.

The South Korean finished two shots clear of Minjee Lee and In Gee Chun to incredibly win her sixth event in her last 10 starts on the circuit.

It was also Ko's 30th consecutive round under par and she has now won 13 LPGA Tour titles in her career and solidified her place at World No.1.

"I am just proud of myself to record 60s, 15 rounds like straight. So, I’m so happy. I feel amazing right now," said Ko after her win at Sentosa Golf Club in Singapore.

"I can't wait to play in the States. See you there!"

Another trophy and another winner's message from Jin Young Ko #HWWCGolf pic.twitter.com/ykCTeF4HEP

Ko had taken a three-month break prior to this event, but she showed no rust and in the final round, she made seven birdies and just one bogey on the par-4 12th hole.

Chun made a bogey at the par-4 6th hole and simply couldn't find the scoring power to reach 17-under-par alongside Ko.

Despite Lee making birdies on six of her last seven holes, the Australian also couldn't find the score required to force a playoff.

With her win, Ko moved to fifth in the Race to the CME Globe with Danielle Kang still sitting at the top of the season-long points list.

Next Page: PGA Tour: How much did each player win at the Arnold Palmer Invitational?