Will Jin Young Ko become the greatest LPGA Tour player of all time?

Jin Young Ko shattered records when she won her sixth event in 10 starts. Is she on the path to toppling Annika Sorenstam? 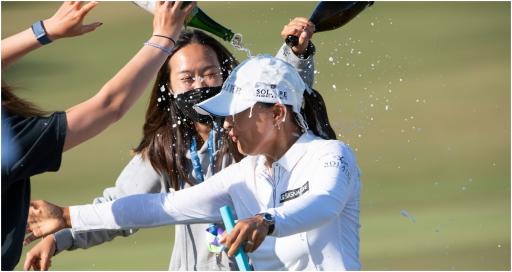 There is no denying: the streak Jin Young Ko is on at the moment is probably one of the best we have seen and probably will ever see.

Golf writers have been suggesting that if she was a man, she would be leading the coverage on every major network and publication.

In her last five starts, she was won four times. She has won six occasions in her last 10. Ko has had 30-straight rounds under par.

Of those rounds, 15 of them have been consecutively in the 60s for the 26-year-old who will only get better.

Moreover, in her final rounds, she has a scoring average of 66.9. Simply sensational stuff from the perfectionist.

Her latest win came at the HSBC Women’s World Championship in Singapore. It was her first LPGA Tour event of the season.

Will Jin Young Ko become the greatest LPGA Tour player of all time?

So she started her season exactly where she left off: winning, and in style with a two-stroke victory over Minjee Lee.

That last victory came at the CME Group Tour Championship where she also snatched the player of the year gong away from Nelly Korda.

Before she pegged it up, she had a lofty goal: simply to just win more than she did last season and to hit more greens and fairways.

What exactly is the secret to her success? Rarely does she miss, of course, but when she does it seems to be in the right places.

Ko manages her game so well it draws comparisons with Annika Sorenstam, who will return to play another US Women's Open this year.

By shooting 66 in her final round last week, she shattered the record held by Sorenstam and So Yeon Ryu.

It was her 15th consecutive round in the 60s. "Magical," she said after the win, adding: "I'm so proud of myself".

That was her 13th victory on the LPGA Tour. She has some way to go if she is to catch Sorenstam, who racked up 72 victories.

Sorenstam, 51, also won 10 majors. Ko has won two majors. Both of those came in 2019 at the Evian Championship and the ANA Inspiration.

Can she become the greatest ever? At this rate, it's still very hard to believe she could catch Sorenstam.

But anything is possible. And doesn't she know it.