Justin Thomas revealed he has lost sleep over the division that has been caused between the PGA Tour and the LIV Golf Invitational Series. 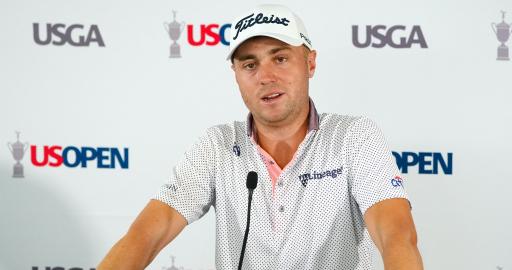 Justin Thomas revealed his sadness at seeing players leave to join the LIV Golf Invitational Series, with some players accepting over $100,000,000 to compete.

Speaking to the press at the US Open on Monday, Thomas admitted he has lost sleep recently when thinking of the stake that has been planted between the PGA Tour and the LIV Golf Series.

Thomas came third at the RBC Canadian Open last week which proved to be one of the most exciting weekends of the season, involving himself, Tony Finau and the eventual winner Rory McIlroy.

"It was a big week for the PGA Tour," Thomas said at The Country Club in Boston as the event at St. George's Golf & Country Club arguably showed what the LIV Golf defectors are missing.

"I was obviously very happy for Rory and him winning the tournament. I have a lot of respect for him, not only as a golfer but just as a person. I see how hard he works down in Florida, and it had been a little while since we've had that battle against each other on a Sunday," Thomas said.

"I definitely could have written the ending a little bit better if I could have come out on top. It just was a big week for the tour.

"I tossed and turned and lost a lot of sleep last week thinking about what could potentially happen, and I grew up my entire life wanting to play the PGA Tour, wanting to break records, make history, play Presidents Cups, play Ryder Cups.

"The fact that things like that could potentially get hurt because of some of the people that are leaving, and if more go, it's just sad. It's really no other way to say it. It just makes me sad, because like I said, I've grown up my entire life wanting to do that, and I don't want to do anything else.

"The people that have gone, like I said, they have the decision that they're entitled to make. Not necessarily that I agree with it one way or the other, but everything has got a price, I guess."

Thomas and McIlroy have been the leaders in supporting the PGA Tour and choosing legacy over the millions and millions of pounds that have been accepted by the likes of Phil Mickelson, Bryson DeChambeau and Dustin Johnson.

The two-time US PGA champion also said from the talk he'd heard in recent months, that players such as Mickelson and DeChambeau were always going to join Greg Norman's Saudi-backed series.

He expressed his dismay that during US Open week, the majority of questions are based on LIV Golf. Sadness was certainly in the air with Thomas yesterday at Brookline.

Next Page: Phil Mickelson defensive AGAIN at US Open, sympathises with 9/11 families