Westwood wanted to see more of a wide shot of the 18th green during the European Solheim Cup celebrations. 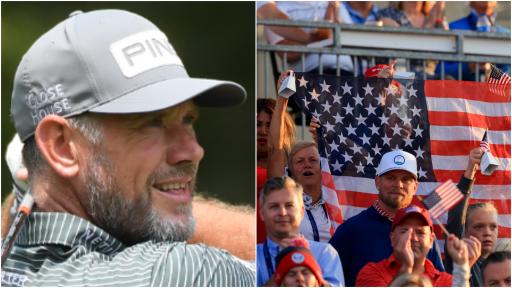 Lee Westwood took to Twitter last night to fire shots at the American crowd who decided to leave early at the Solheim Cup.

Westwood, who is competing on home soil at this week's BMW PGA Championship on the European Tour, admitted he would like to have seen a wide shot of the 18th green during Europe's celebrations following their incredible 15-13 victory in Ohio.

I’d love to see a wide shot of that 18th green. Not sure many spectators stayed. @SolheimCupEuro @TheSolheimCup #tumbleweed

"I’d love to see a wide shot of that 18th green. Not sure many spectators stayed #tumbleweed," tweeted Westwood.

Golf journalist Ewan Murray, who had been reporting live from the course all week, replied: "Wandered out for a look there... "sparse" [crying laughter face]

A number of European golf fans - and European media - were disapproving of the US gallery during the three days of play.

Many American fans in the gallery appeared to remain silent whenever a European player hit a good shot or holed a putt.

"The crowd did not applaud any European shots," tweeted one golf fan. "Not very gracious."

"I have never seen players in a Solheim Cup / Ryder Cup literally "begging" for applause as much as Team USA this week." tweeted one golf fan.

"It was embarrassing. Asking for cheering while you're swinging on the first tee? It's just silly. Begging for applause after a three foot putt to tie, embarrassing."

Another tweeted: "The Americans played the crowd too much. They tried to get the fans to intimidate them instead of concentrating on the golf. Great victory for the Europeans."

NEXT PAGE: EUROPE DEFEAT USA AT THE SOLHEIM CUP