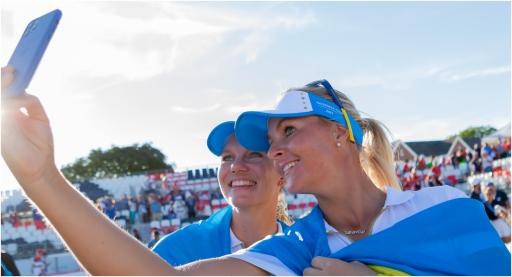 Team Europe won the Solheim Cup against the United States for only the second time on American soil.

The last time they did so their captain Catriona 'Beany' Matthew was part of the side.

But it's unlikely as many people across the world tuned in to watch that victory in Colorado in 2013 as they did over the weekend.

It's fair to say the women's game has grown since then, and is continuing to grow such is the popularity of some of the highest profile players.

But it's not all about Instagram in growing the game of golf.

Here are five ways to promote women getting into golf

1. Host events that are geared towards women with concepts such as 'father-daughter' style competitions, family fun days with prizes, or even a casual ladies-only roll-up with a drink afterwards. It would also be a good idea not to market the evening's as a 'ladies night'. Be creative.

2. Host a women's golf day that includes a lesson on the range, some chipping, putting and bunker tutorials followed by a 9-hole competition with a BBQ afterwards. Make this available to the general public and not just members. It's also important not to price out the public with an introduction to golf.

3. Set up an academy. Offer discounted prices and unlimited access to the course during non-peak times. Golf is a demanding game skill-wise and many beginners do feel nervous on the course especially if it's busy.

4. Make it easy for members to buy promotions online, such as discounted lessons if you bring a friend and introduce them to the game. First impressions are important so if you can offer a fair and competitive price it's likely they will return.

5. Embrace change. Embrace ready golf and worry less about previous etiquette such as who has the honour over a tee shot or putt. It's a no-brainer that if rounds are shorter, people wait less and will want to play more of the game.