Nelly Korda proves her mental toughness to overcome disaster at the penultimate hole with back-to-back birdies at the 18th hole. 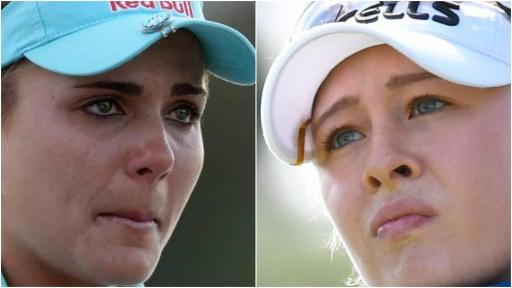 Nelly Korda proved her mental toughness and why she is the best player in the ladies game right now as she overcame a triple-bogey seven on the penultimate hole to win the LPGA Tour's Pelican Women's Championship on Sunday evening.

In one of the most incredible finishes on the circuit in recent memory, Korda, 23, carded a final-round 69 before going on to defeat Lexi Thompson, Lydia Ko and Sei Young Kim with a birdie at the first extra hole.

But it was not without drama. Far from it.

Starting the final round tied together 16-under par, Korda moved into a two-shot lead over Thompson with seven holes to play.

The pair found themselves well clear of those behind in what was turning out to be a two-player race to the finishing line.

But as they often say in sports, it's never over until it's over, and that very much proved the case in Florida on Sunday evening.

Thompson pulled level with Korda on 19-under par by the 12th hole following a birdie-bogey swing, and they were still four shots clear of the chasing pack.

Pars were exchanged over the next four holes before the wheels came off for both Korda and Thompson on the par-4 17th, especially Korda.

From the middle of the fairway, Korda missed the green with her approach shot and then proceeded to chunk her chip shot into the greenside bunker in front of her.

Korda then splashed out to some 12 feet but she could not convert her bogey putt as the ball sailed two feet past the cup.

Thompson then missed a short four footer for par, resulting in a bogey-five.

Sensing an opportunity to remain in the hunt, Korda then stepped in and missed an even shorter two-footer, resulting in a triple-bogey seven.

It all meant that Thompson was now one shot clear of Lydia Ko and Sei Young Kim on 18-under par heading down the final hole, with Korda two back on 16-under par.

Thompson drilled a superb drive down the middle of the 18th fairway but then sent her approach shot to some 40 feet away in the fringe.

After taking free relief from a sprinkler head, Thompson rolled her ball up over the slope and down to some four feet shy of the cup.

Korda, to her credit, bounced back with a superb birdie from 15 feet to join Ko and Kim on 17-under par in the clubhouse.

The stage was now left for Thompson to see out her 12th LPGA Tour title and first win since 2019, but she could not convert from four feet as her ball drifted past the right side.

It meant a four-way playoff for the title.

Back up the tough par-4 18th, and Kim and Ko both sent wayward approach shots left of the green.

Korda hit a lovely shot into 15 feet on the exact same line as her birdie putt in regulation.

Thompson went even better to some five feet, on a similar line to her missed four footer at the 72nd hole.

Kim and Ko chipped up to short range, but Korda then drained her 15-footer once more for birdie to pile the pressure on Thompson.

The playoff birdie that clinched win No. 4 of the season, No. 7 of @NellyKorda's career! pic.twitter.com/08mHoruUL1

Putting on the same line as her short missed putt in regulation, Thompson missed on the other side of the hole this time around to hand victory to Korda.

The victory sees Korda move back in front in the season-long Race to CME Globe.