The Vare Trophy is awarded to the player with the best scoring average on the LPGA Tour, but neither of the Korda sisters is eligible to win it. 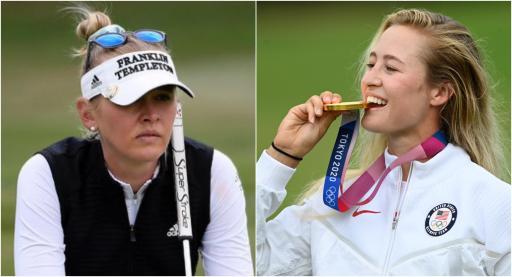 Nelly and Jessica Korda, two of the world's best ladies golfers, have been left bemused and disappointed at the rules that will prevent them from winning the Vare Trophy.

Nelly, the number one ladies golfer in the world, is currently ranked first in the LPGA Tour scoring average with a score of 69.074, but she is ineligible to win the Vare Trophy.

This is because you have to play a minimum of 70 rounds across the season and even if Nelly completes four rounds at the Pelican Women's Championship and the CME Group Tour Championship next week, she will still fall short of this mark.

Jessica is ranked sixth in the scoring average standings on 69.927 so she cannot catch her sister or second-placed Jin Young Ko.

RELATED: TIGER WOODS' SCORING AVERAGES BY YEAR ARE SCARY, ESPECIALLY THAT SEASON IN 2000

But like Nelly, Jessica, Ko and Inbee Park are also not eligible to win the Vare Trophy because they can't play the required amount of rounds to qualify for the award.

Therefore, next in line on the scoring average standings is Lydia Ko who sits in fourth place. The two-time major winner needs to make the cut this week and next week to win the Vare Trophy.

This will be the second year in a row that the player with the highest scoring average won't be eligible to win the Vare Trophy. Danielle Kang won the award in 2020 with an average of just over 70.

Nelly has not played on the LPGA Tour since she finished tied 19th at the Cognizant Founders Cup in early October and she also commented on the physical exertion over a season that is needed to qualify to win the award.

"I don't think I could have played more events because my body was just so tired," Nelly added.

"I typically play all the events at the start of the year, and if I play well then I'll take some time off, because the travelling in the summer was just so crazy."

NEXT PAGE: "LAST YEAR IT WAS A LITTLE DIFFICULT": MATTHEW WOLFF OPENS UP ON THE BLACK DOG