Rory McIlroy gave Georgia Hall a putting tip before The Open and it is already paying dividends for the major winner. 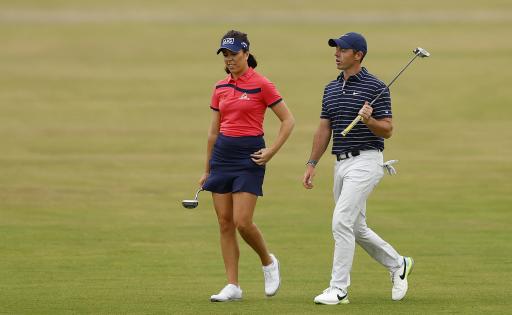 Rory McIlroy gave Georgia Hall a tip at the 150th Open Championship at St Andrews you'd be surprised she hasn't been implementing.

McIlroy, 33, played with Hall before the landmark major in the celebration of champions' event.

Hall posed for a picture on the Swilcan Bridge with the Northern Irishman, Lee Trevino, Tiger Woods and Jack Nicklaus and later said how she was going to get the picture framed.

Speaking before the Trust Golf Scottish Open, Hall revealed that she had a conversation with McIlroy during the four-hole loop that led to a change in her putting.

Both Hall and McIlroy use the same putting coach - Brad Faxon - and have admitted that they struggle with right-to-left putts.

Hall told the media: "I started using a line on the golf ball last week for the first time in a couple of years, because we briefly spoke about that, and I putted probably the best I have this year. So I'm going to continue to do that.

"It's just nice to get some inside information as well and speak to someone who has done it all."

That's pretty surprising. Hall, 26, tied for eighth at the Amundi Evian Championship in France that was won by Brooke Henderson.

Hall also spoke favourably of the fact McIlroy takes an interest in the LPGA Tour and LET.

She added: "He says that he watches women's golf and how kind of UK players are doing and it's really nice just to meet someone really genuine and interested in our part of the game as well."

Hall's best finish this season came on the LET earlier this year when she won the Aramco Saudi Ladies International.

After this "tip" from McIlroy, she earned her first top-10 finish on the LPGA Tour this season.

Next page: McIlroy's tears after another major heartbreak at The Open