Tiger Woods experienced an emotional end to The 150th Open Championship last week, but he continued his return to top-tier golf with some time in Spain. 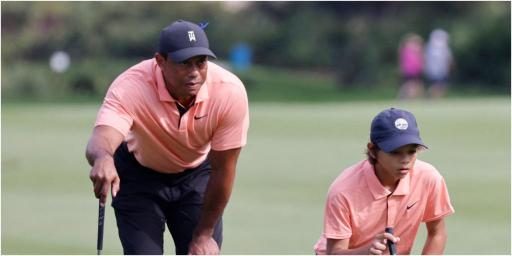 15-time major champion Tiger Woods and his son Charlie have been spotted playing golf in Spain after Woods bowed out of The Open Championship at St Andrews last week.

As reported by MARCA, Woods and his 12-year-old son teed it up at Son Quint, a course which was opened in 2007 and it is the newest course in Mallorca.

Woods is reportedly on holiday after missing the cut at St Andrews which was just his third appearance on the PGA Tour this year. He came 47th at The Masters and he withdrew from the US PGA Championship before the final round.

Golf fans and players will be encouraged by the photos released by TWLegion on Twitter. The 46-year-old was seen carrying a large black golf bag next to his son.

Related: Lee Trevino on LIV Golf: "The sails are going to break on that ship"

#NEW: Some post Open Championship photos of Tiger playing golf in Spain, where he’s reportedly been vacationing following the tournament. Still playing golf so that is a great sign! ( via @marca, h/t: @Tengolf) pic.twitter.com/RWfEnKZtkE

Back in December 2021, we saw the father and son duo tee it up in the PNC Championship. They came second behind John Daly and his son in an event they expect to play in again in 2022.

It was great fun to watch young Charlie show off his skills in front of the PGA Tour cameras, all be it an unofficial event. He showed the ability and mannerisms of his superstar father at the Ritz-Carlton Golf Club in Orlando.

Woods' caddie Joe LaCava revealed on the Dan Patrick Show that Woods could play in his own Hero World Challenge in December as well as the latest edition of the PNC Championship.

There is a chance the 82-time PGA Tour winner could play in the Genesis Invitational next season, a tournament which is hosted by the Tiger Woods Foundation.

Despite returning to the home of golf where he has won the Claret Jug twice, Woods' performance at The Open showed we need to manage our expectations of what he is capable of in the future.

Next Page: Brooke Henderson makes HISTORY in second round of Evian Championship