Report: Rory McIlroy wept in Erica Stoll's arms after heartbreak at The Open

Rory McIlroy reportedly was inconsolable after another major escaped his grasp at the 150th Open Championship at St Andrews. 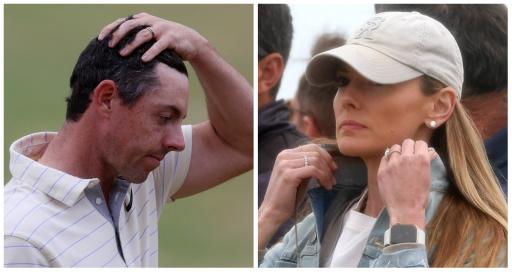 Rory McIlroy may have kept up a brave front after another major escaped his grasp at the 150th Open Championship.

But according to Golf.Com, the 33-year-old Northern Irishman burst into floods of tears no sooner had he embraced his wife Erica Stoll after doing his round of media interviews.

If you're a McIlroy fan, this image will fill you with pain. The collective will of more than 50,000 spectators last Sunday was not enough to help him claim the win at the home of golf.

McIlroy, a four-time major champion, paid tribute to Cameron Smith's stunning Sunday 64, conceding that he lost to the better man. However, he admitted that he felt like this Open was one that he let slip through his hands.

He began the day with a four-shot lead - tied at the top with Norway's Viktor Hovland - but in the end found himself needing an eagle at the iconic 18th hole at the Old Course at St Andrews to force a playoff with the Australian.

It was not to be.

After completing his round of media interviews, Erica Stoll was waiting on a nearby golf cart. That's when it hit home for Rors.

A colour piece by Golf's Dylan Dethier outlined what it was like behind the scenes in the immediate aftermath.

Per the report, which you can read here, it states:

"McIlroy’s wife Erica was waiting for him just around the corner, stationed beside a golf cart ready to whisk them away. Up to this point, Rory had kept a strong front. He’d cheered the crowd behind 18. He’d shaken hands, thanked officials, greeted volunteers. He’d answered every question. Now he crumpled into his wife’s arms. The two shared a long embrace, an affirmation that eight years is a long time to carry a heavy burden. That all of this meant exactly as much as it seemed from the outside. And then, as they slid into the back seat of the cart, Rory buried his head in Erica’s shoulder and wept as they drove off into the night."

What did Rory McIlroy say about another major heartbreak?

"[I am] disappointed obviously. Yeah, I felt like I didn't do much wrong today, but I didn't do much right either. It's just one of those days where I played a really controlled round of golf. I did what I felt like I needed to just apart from capitalising on the easier holes -- around the turn, 9, 12, 14. If I had made the birdies there from good positions, it probably would have been a different story.

"But, look, I got beaten by a better player this week. 20-under par for four rounds of golf around here is really, really impressive playing, especially to go out and shoot 64 today to get it done.

"Yeah, I'll rue a few missed sort of putts that slid by. But it's been a good week overall. I can't be too despondent because of how this year's went and this year's going. I'm playing some of the best golf I've played in a long time. So it's just a matter of keep knocking on the door, and eventually one will open.

More: What Rory McIlroy did to make Tiger Woods cry