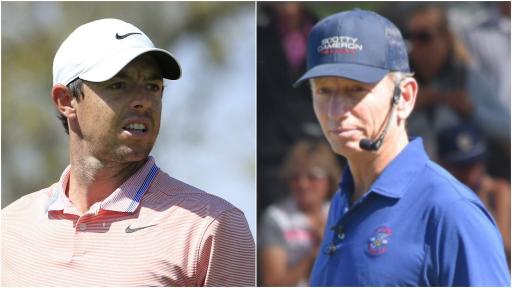 How much would you spend in order to spend some time with Rory McIlroy? For Brad Faxon, it was the best $1,800 he has ever spent.

Faxon, an eight-time winner on the PGA Tour, is regarded by many as one of the finest putters the game has ever seen. It was therefore no surprise that McIlroy hit up the American with a text message just days before the 2018 Arnold Palmer Invitational to come and cast an eye over his putting stroke.

A week later, McIlroy would be slipping on the famous red cardigan for winning the Arnold Palmer Invitational after one of the hottest putting displays of his career on the PGA Tour.

"Look, I think I had a little bit to do with it but I didn’t have a lot to do with it," said Faxon. "He’s so talented, just letting him be more like himself is a big part of it."

Faxon had been so excited to work with McIlroy that he even told his wife he would be making a de-tour before coming home to see her.

"I had booked a flight to come home Monday morning out of LAX and it was JetBlue with the big lie-down chairs, and I got it for $300," said Faxon, who had been playing in a Champions Tur event in California when receiving a text message from McIlroy after his third round.

"Then I had to go online to American Airlies and change my ticket. It cost me like $1,800. I told my wife what was happening and she said 'so you like Rory McIlroy more than you like me?' I replied 'right now, yes.'"

Faxon added: "Rory’s not an intimidating person as far as personality goes. He’s an easy guy to like and to get to know, but I was extremely nervous because I take what I do very seriously.

"I know how good a player he is and how good he wants to be. I didn’t want to screw up my first chance."

McIlroy had initially booked Faxon in for a one-hour slot to look at his putting technique at The Bear's Club, but it would prove such a successful first session that it eventually lasted three hours.

The former World No.1 went on to win at Bay Hill six days later but then had wait over a year to pick up his next win at The Players Championship. It would, however, be a year where McIlroy would land his second career FedEx Cup title - something he owed to the great work he had been putting in with Faxon on the greens.

McIlroy and Faxon continue to work together in 2021, and while the four-time major champion has chopped and changed his putter in recent times, he could not be happier with the constant guidance he receives from the putting guru.

"We all get into this mindset out here that you need to do everything absolutely perfectly, and you don’t," said McIlroy.

"That’s one of the big things. That mindset of not trying to get to perfection sort of frees you up. That’s what he’s given me.

"Any time I spend time with him I feel like I have a little more freedom, or there’s not as much pressure on me to hit perfect shots."

Faxon added: "We talk very little about mechanics, about things like path and face rotation. We talk more about situations."

McIlroy got off to the perfect start in his bid for a first win on the PGA Tour since November 2019 with an opening 66 at Bay Hill.