Chiara Noja plays on the Ladies European Tour Access Series and she is set to make her professional debut in Dubai this week. 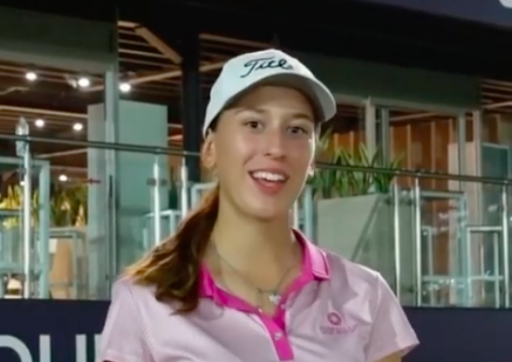 Chiara Noja is a 15-year-old girl that is primed and ready to take on the Ladies European Tour for the first time this week in Dubai, just minutes away from her home.

But Noja has been on a long journey to this point, which began where she was born in Germany. She was raised in England and she moved to Dubai last year.

Her family felt that winter training in England was not good enough for Chiara to get to the next level in her game. Her mother received a job offer to move to Dubai and so things stemmed from there.

The young superstar has been playing on the Ladies European Tour Access Series, which she has shown solid form on in the last 12 months.

RELATED: WAS THE R&A RIGHT TO ANNOUNCE CHANGES TO AMATEUR GOLF AND HOW RIFE IS CHEATING?

As a 14-year-old, Noja made her LET debut at the 2020 Dubai Moonlight Classic where she finished in 55th place.

She was unhappy with her performance that week, which included a second-round score of 86.

"I was unable to deal with the pressure and the fact that millions of people were watching on TV, and consequently had a complete meltdown," said Noja.

"This year has been a lot of growth mentally, just accepting that failure is going to be part of it whether I want to accept that or not."

Now she is a professional, she seems to have a new lease of life and she will be amongst a strong field this week at the Emirates Golf Club.

The tournament is played from October 27-29 on the Faldo Course and the likes of Attaya Thitikul, Catriona Matthew, Laura Davies, Maria Fassi and Bronte Law will also be present.

Noja will be hoping to use her great athleticism and power in the event. She averages 280 yards off the tee and she has previously said that American major winner Nelly Korda is her inspiration.

Need we say more. At just 15 years of age, we are in for a hell of a journey with Noja and it will be exciting to see the many chapters of her career along the way.

NEXT PAGE: TOM BRADY? TONY ROMO? WHO IS THE BEST GOLFER FROM THE NFL?