U.S. Women's Open: Minjee Lee reveals text from hall of famer is spurring her on

Minjee Lee will take a three-shot lead heading into the final round of the U.S. Women's Open at Pine Needles Lodge. 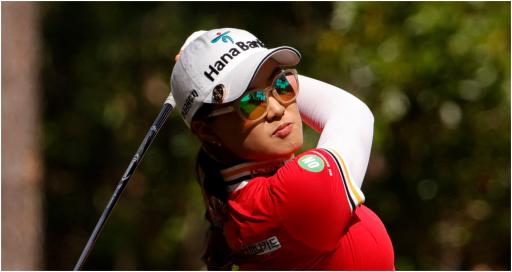 Australia's Minjee Lee says she's already had one legend send her a text message this week as she prepares to take a three shot lead into the final round of the U.S. Women's Open.

Related: Danielle Kang reveals she has a spinal tumour

The World No. 4 has been in fine form at Pine Needles and moved clear of the racing pack after she strung five birdies together in the space of seven holes either side of the turn to take her championship score to 13-under in round three. Mina Harigae is at 10-under.

England's Bronte Law is third at 7-under par while New Zealand's Lydia Ko is a further stroke back. The surprise package this week has come in the form of Sweden's Ingrid Lindblad. The Swede carded the lowest score by an amateur in U.S. Women's Open history in round one.

Lindblad is on the same score as Ko and will need mistakes from Lee if she is to truly pull of a shock win. This week Michelle Wie West bid farewell to the game (for at least a year). She missed the cut, as did the lengendary golfer Annika Sorenstam.

But for Lee, though, she has the opportunity to win her second major. The 26-year-old won last year's Evian Championship. She is the sister of DP World Tour pro Min Woo Lee. She revealed after her third round that Karrie Webb has given her a supportive text message.

"Keep it going, let's go Aussie," she said the message read from the seven time major winner who won 41 times on the LPGA Tour in her illustrious career. Lee said after her 4-under 67 that she didn't feel too nervous and that her calm personality is a strength of hers.

She added: "You know, my approach is going to be the same as the last three days. I'm just going to try and make as many birdies as I can to give myself as many opportunities as I can on the greens. Play safe when I need to and just take one shot at a time really."