Arsenal legend Paul Merson finds the water at The Masters

The former Arsenal player and Sky Sports pundit took a shot on The Masters golf simulator, but with disastrous results. 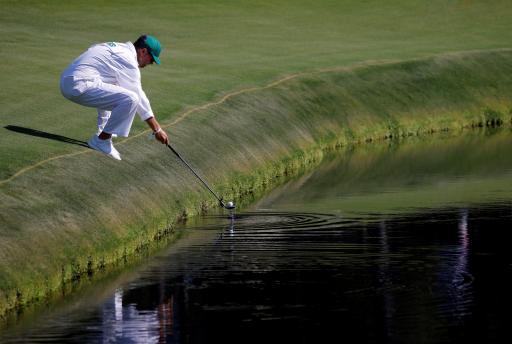 Arsenal legend Paul Merson came unstuck when hitting a shot on a golf simulator in the studio at Sky Sports this week.

Merson was playing the 15th hole at Augusta National which is a tough par-5 where many of the world's greatest players have made mistakes in the past when chasing the green jacket.

The 53-year-old had 150 yards into the green and chose to hit a 5-iron. His low, drawing shot bounced on the downslope short of the green and his ball trickled into the water.

Popular football show Soccer AM were quick to pick up on Merson's blunder and wasted no time in posting it on their Instagram account, accompanied by some emotional music.

WATCH THE VIDEO BELOW AS MERSON FINDS THE WATER

"You know what that means," said Merson after he hit his shot in the water. "The caddy goes, the caddy goes."

"As soon as I get near the water," Another who related to Merson's shot commented.

Merson spent 11 years at Arsenal where he scored 57 goals in 264 appearances, he also had 21 caps for England and scored three goals for his country.

Merson was tackling the golf simulator on the eve of The Masters, which starts tomorrow when World No.1 Dustin Johnson will look to defend the title that he won in November.

Johnson finished five shots clear of Sungjae Im and Cameron Smith on 20-under-par which is the record score for a winner at The Masters.

Jordan Spieth enters the week in fine form and off the back of his win at the Valero Texas Open, and many fancy him to go close again at Augusta this week.

NEXT PAGE: THE MASTERS: WHICH GOLFERS CARRY THE BEST HOPES FOR AN ENGLISH WIN?

Previous
Brooks Koepka fighting through the pain with "funny" way of bending down
Next
WATCH: Five things to expect from the 2021 Masters Tournament