Brooks Koepka compared himself to a Power Ranger after an image went viral of his new way of reading greens at Augusta National. 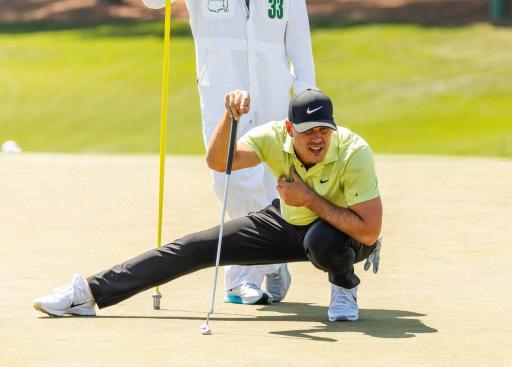 Brooks Koepka compared his new pose on the greens to a Power Ranger on social media just days before The Masters begins, after he revealed he is unable to bend down due to his knee injury.

It was looking unlikely that Koepka would make it to Augusta National this week after he underwent surgery to fix a fresh knee injury, but the four-time major winner is willing to play through the pain.

“There's like an internal brace they put in there right where the screw is,” Koepka said at Augusta National. “I don't even know if it's a screw. It's probably the most sensitive part of the knee, the kneecap. They had to put it there just because it's still broken.

“I don't know even what they put in there, but there's a bunch of stuff going on in there that can cause a pain right where the brace is. It's probably the most sensitive spot, so it's going to pull. It's going to hurt downhill."

Koepka has already played a few rounds at Augusta to prepare for the first major if the year, but admitted it caused his knee to swell once he had finished a full day of practice.

“I’m just watching my steps at home, kind of watching how many minutes I'm on my feet, not spending too much time on the feet and just getting it worked on and getting it fleshed out, making sure I control the swelling because if swelling pops up it's quite difficult," he added. "Yesterday it swelled up a little bit, but nothing I can do.

“I can't bend down. My knee doesn't go. I mean, that's the most stress you're going to have on your patella. I don't have that much motion in my knee. Prone I can get it to about 90 degrees and that's about it. But getting down, it's going to look funny, I know that. But what are you going to do?”

As Koepka can't bend down properly, it makes reading putts a little more challenging and the 30-year-old posted a picture of his new pose on Twitter alongside an image of the Power Rangers, with the caption: "Same energy".

NEXT PAGE: Bryson DeChambeau adds prototype 4.5 DEGREE driver to his bag for The Masters

Previous
Who is Dustin Johnson's partner? Meet Paulina Gretzky
Next
Arsenal legend Paul Merson finds the water at The Masters