Tiger Woods betting odds to win The Masters are heavily slashed after he confirms he is not only playing but that he feels like he can win. 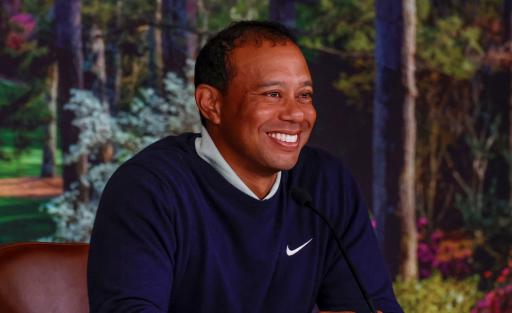 Bookmakers have slashed the betting odds on Tiger Woods to win The Masters at Augusta National this week as a result of his Tuesday press conference.

Woods confirmed he will not only be competing at The Masters this week but that he believes he has every chance of winning a sixth Green Jacket.

"As of right now, I feel like I'm going to play in The Masters," Woods told the media in his Tuesday press conference at The Masters.

"I'm going to play nine more holes tomorrow. My recovery has been good, that has been the challenge.

"Another day of nine more holes and then comes game time."

Related: Tiger Woods says he is going to play in The Masters and he even thinks he can win it

Quizzed on whether he thinks he can win the tournament, Woods wasted little time in his response and said: "I do."

Woods also made it clear that he would not be teeing it up if he did not believe he could win.

Fred Couples, who played a practice round with Woods and Justin Thomas on Monday afternoon, believes Woods is right to think just that as well.

"If he can walk 72 holes around here, he'll contend," said Couples. "The driver was a machine. I watched it today, he looked phenomenal."

It's fair to say that after Woods' latest comments, the bookies are hiding for cover and not prepared to take any chances as no doubt hundreds of Tiger fans rush to place their bets on their hero for a 16th career major title.

Woods' odds to win The Masters were as big as 80/1 last week.

But after Woods' press conference at Augusta National, those odds have now been slashed down to 40/1 before a shot has even been struck ahead of Thursday's first round.

You can still get 55/1 in places but those prices are going fast.

Woods will tee off alongside Louis Oosthuizen and Joaquin Niemann on Thursday and Friday.

The 15-time major champion will be making his first competitive start on Tour since The Masters in November 2020 when he finished tied 38th.

Woods underwent back surgery at the end of 2020 and then came close to death when crashing his car in Los Angeles in February 2021.

Despite a long road back and not knowing if he would ever pick up a golf club again, Woods got out of hospital and soon back onto his feet to compete in the PNC Championship with his son Charlie Woods, a tournament which saw Team Woods finish in second place.

But now Woods is competing in the biggest event of them all, and very much against all the odds.

Some golf critics and even close friends of Woods revealed at the end of 2021 that he might not even play again until the 2022 PNC Championship, while others thought a return to golf at The Open at St Andrews this July was more within reach.

Woods' appearance at The Masters this week will be his 24th in total.