Tiger Woods' son Charlie Woods is being tipped for a huge career on the PGA Tour - check out the latest golf betting odds. 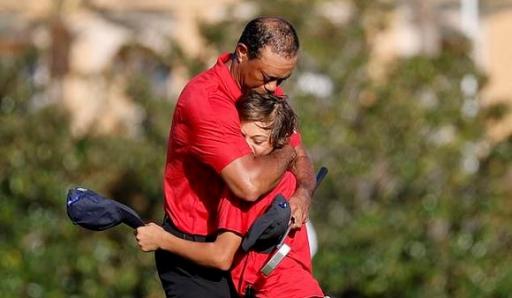 Tiger Woods' 13-year-old son Charlie Woods is being tipped for an incredible career on the PGA Tour one day, and after seeing the young cub in action at the PNC Championship not so long ago his odds have been slashed to win on the circuit before the age of 20 and also 30.

You will be shocked at the price now!

Charlie has performed admirably in the last two renewals of the year-ending PNC Championship alongside his father Tiger Woods, winner of 15 majors and 82 PGA Tour titles.

After a top 10 in their debut two years ago, Charlie and Tiger joined forces again in December 2021 and finished second behind John Daly and his son John Daly II, another up-and-comer to watch out for on the PGA Tour one day.

If you have not seen Charlie's swing before, you are missing out - it really is a thing of beauty and will likely only get better as he builds more strength and gets taller while under the tutorship of his father.

Related: Golf fans react as journalist says Charlie is "not the next Tiger"

Make it 77 million and one. @TigerWoods watches : . pic.twitter.com/pfBYcx374d

Tiger has already made it clear that he will not be putting him under any pressure to make it big on the PGA Tour.

If Charlie wants to just play golf as a hobby and take up something else for his career, Tiger will be more than happy with that.

For Tiger, who narrowly avoided death in a car crash little more than 12 months ago, just being able to stride the fairways and spend time with his son Charlie, 13, and daughter Sam, 14, is all he cares about moving forwards.

But for those of us who want to get excited about Charlie's future in golf, there are betting markets available for him going on to win his first PGA Tour title and also his first Major title.

Just for the record, Charlie is regularly playing off scratch right now and he has been shooting a number of under-par rounds and winning tournaments in his age group back home fairly regularly.

He is still some way off becoming a pro golfer though, and certainly some way off earning a PGA Tour card let alone winning an event.

But the bookies are certainly not taking any risks, let's just put it that way.

Bookies.com oddsmaker Adam Thompson has got in touch with GolfMagic, creating projected Charlie Woods odds for milestone moments for an upcoming career.

These are projected golf odds and are not currently available at legal betting sites.

We have listed the odds in UK fractional odds first, followed by their equivalent American Odds.

Charlie's price on winning The Masters within the next 17 years has got to be worth a tickle though, right?!

After all, Tiger was 21 years old when he slipped on the famous Green Jacket for the first time in 1997.

Will Charlie Woods win a PGA Tour event before age 20?

Will Charlie Woods win a PGA Tour event before age 30?

Will Charlie Woods win a Major Championship by age 30?

Will Charlie Woods win The Masters by age 30?

CLICK HERE TO READ THE BOOKIES.COM ARTICLE ON CHARLIE WOODS

NEXT PAGE: TIGER, PHIL AND BRYSON TO ALL RETURN TOGETHER AT THE MASTERS?!