Bryson DeChambeau adds prototype 4.5 DEGREE driver to his bag for The Masters

Cobra have made some changes to the new RADSPEED driver to help Bryson DeChambeau conquer Augusta National this week. 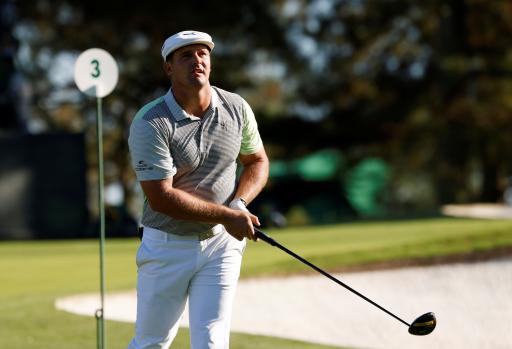 Bryson DeChambeau will have a new prototype Cobra driver in the bag that will be turned down to an astonishing 4.5 degrees of loft as he looks to conquer Augusta National at The Masters this week.

The Cobra RADSPEED driver was released earlier this year and has already been a huge hit with amateur golfers all over the world, but a few changes have been made to help DeChambeau improve on his T37 finish at last year's Masters in November.

According to Cobra Tour rep Ben Schomin, DeChambeau will game a 46-inch 5.5 degree prototype driver that is turned down to 4.5 degrees to provide even more distance for the PGA Tour's biggest hitter.

Some other changes have been made to the driver too, such as a thicker face to make the club more durable - due to some issues DeChambeau's power have caused his clubs in the past - while a flatter toe radius will seek to help his mis-hits.

DeChambeau and Cobra have been working on the new prototype for several months now and although the 27-year-old is confident his long game will benefit him at Augusta, he is fully aware that it's going to take more than distance to get the job done.

“There are certain holes out here where length does help tremendously,” DeChambeau said at Augusta National. “But you go up around those putting greens, and you just try to hit it into those areas of the green where the pins are, and it becomes very diabolical.

“Length is only as good as you can hit your next shot, is what I always say. And that’s the most important thing about Augusta National, is it doesn’t test just the driving. It tests your second shots, it tests the third shot, it tests making your 4-footer you’re trying to make for par.”

DeChambeau was left a little red-faced last year after he made certain comments regarding the difficulty of Augusta, only to make the cut on the number and finish nowhere near Dustin Johnson.

The reigning US Open champion revealed he will have a slightly different game plan this time around, focusing a lot more on his approach play and hitting the right areas of the tricky Augusta greens.

“I’m going to be focusing mainly on accomplishing how do I hit iron shots into greens to give myself the best chance to give myself the ability to make birdie,” he said. “There was a lot of times last year where I hit decent enough drives, but I just didn’t feel like I was hitting shots in the correct quadrants of the greens or giving myself opportunities on par 5s like I should have.”

The greens will be playing a lot firmer than they did when The Masters was held at a later date in November in 2020 due to the coronavirus outbreak and DeChambeau believes that factor is something that suits his game down to a tee.

RELATED: Bryson DeChambeau RIPS DRIVER BOMBS one after another on Masters range!

“From what I've experienced in the past, making it firmer and faster has for some reason helped me play a little bit better,” he added. “I just feel like wet conditions and the landing and stopping and the golf ball being wet has played a little bit to me not knowing fully what the golf ball is going to do.

“So whenever it’s firmer, faster conditions, whether it be Shriners, whether be Bay Hill or the U.S. Open or different golf courses I’ve won on, they have usually always been firm. So I think that plays into my hands nicely for what I’m comfortable with.

“But that doesn’t mean that I’ll be able to control the golf ball as well as somebody else. Somebody could go out and hit a golf ball more consistently with more control than me, and they will beat me.”