Iain Carter was in high spirits after commentating on The Masters on BBC Radio, but his sarcasm about the BBC's golf coverage rubbed a few golf fans up the wrong way. 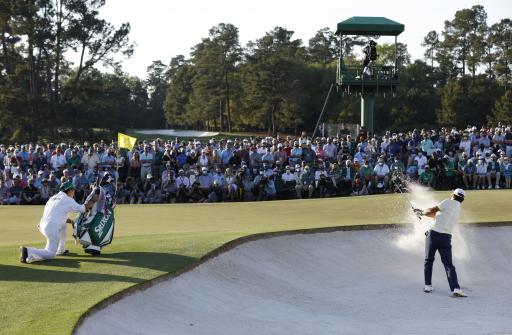 Iain Carter sent out a sarcastic tweet after completing his Masters commentary on BBC Radio, which caused a debate amongst golf fans about the lack of live TV coverage on the BBC.

The BBC was the home of live golf for many years, providing fans with free access to the biggest tournaments in golf, but in 2015 the R&A decided to sell the coverage of The Open to Sky Sports and more tournaments followed suit.

There is now no live golf coverage shown on BBC, but instead a highlights show that is played at the end of each round for certain tournaments, including The Masters. This show however was on fairly late, mainly due to the time difference in the United States.

Carter's BBC Radio commentary of The Masters was extremely popular and golf fans applauded his efforts, but many still believe without live TV coverage, the BBC will continue to fall way down in the pecking order when it comes to golf.

After commentating on two majors in two weeks, with The Masters following the ANA Inspiration on the LPGA Tour, Carter took to Twitter to boast about the the number of people the BBC attracted, whilst also taking a sarcastic poke at those who say the BBC no longer cover golf.

Whilst many fans responded thanking Carter for his commentary, his sarcasm rubbed a few people up the wrong way, causing them to fire shots at the BBC.

The radio is great, but we all know that golf needs to be on terrestrial TV to thrive. The R&A’s decision to sell The Open to Sky remains a misguided, short term one.

Iain the radio has always covered the golf and very well, it’s very dissapointing that the TV people seem to think it’s not worth it, poor highlights packages and at daft times (yes the masters is on late)
They should and could up the game and actually bid for live golf.

The BBC doesn't cover golf anymore, the BBC is dead....

The radio coverage is excellent but it’s the pictures that are missed. Sky’s coverage is great IMO but if the powers that be at BBC think that their commitment to golf remains as was, they are kidding themselves. Thanks for the broadcast though.

BBC radio have always had great Golf coverage, even when it used to be shown live on TV. Don’t think anyone ever said BBCradio don’t do live golf coverage. Listened to many hours radio golf whilst traversing UK. BBC tv does, in my opinion, get criticism for not showing live golf.

You do a great job on the radio . Accept the Beeb no longer has the budget to cover the Big tournaments live but always wondered why it doesn’t give more coverage to the likes of the Walker / Curtis Cup , Am Champs etc .... cheaper and of interest to many club players ??

Radio coverage is great but to not be able to watch Sat & Sun live at the Masters (& don’t get me going on the Open) means I don’t get to share with my family. So many memories of watching with my Father, and ringing my Grandfather to discuss on Mon morning!