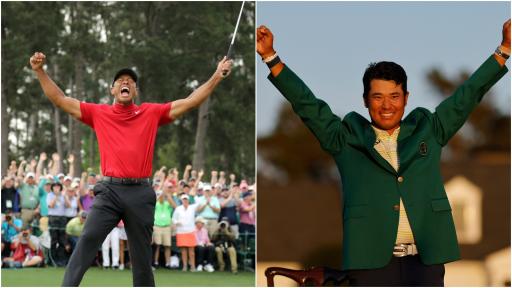 Tiger Woods congratulated Hideki Matsuyama for his "historical" victory at The Masters and believes his win will impact the entire world.

Matsuyama made history on Sunday when he became the first Asian-born golfer to win The Masters and Woods was one of numerous worldwide stars to congratulate him on social media.

Woods won his 15th major title at Augusta in 2019 in one of the most memorable Masters moments in history, but he was unable to participate or even spectate this year due to the injuries he sustained from a car crash in February.

Matsuyama held a sizeable overnight lead heading into the final round and it was pretty plain sailing for the 29-year-old, until he found the water at the par-5 15th, with Xander Schauffele applying the pressure with his fourth birdie in a row.

Schauffele's hopes quickly ended at the next with a triple-bogey and it was Masters debutant Will Zalatoris who took solo second place, finishing just one stroke behind Matsuyama.

Matsuyama's caddie, Shota Hayafuji, won the hearts of golf fans around the world when he placed the 18th flag back in the hole, removed his hat and bowed to Augusta National as a sign of respect.

After claiming his maiden major title, Matsuyama received multiple messages on Twitter from some of the best in the game, with Woods among the first to congratulate the Japanese star.

Making Japan proud Hideki. Congratulations on such a huge accomplishment for you and your country. This historical @TheMasters win will impact the entire golf world.

"Making Japan proud Hideki," Woods posted on his Twitter account. "Congratulations on such a huge accomplishment for you and your country. This historical Masters win will impact the entire golf world."

Jack Nicklaus also posted a message for Matsuyama on Twitter, with the 18-time major winner saying: "I want to send my heartfelt congratulations to Hideki Matsuyama for his Masters Tournament victory, and for being the first Japanese male golfer to win a major championship. I'm not only very happy and pleased for Hideki, but also the whole golfing world of Japan.

"I've been blessed to spend a lot of time in Japan & I know they love the game of golf. They're also very proud people and they're even prouder today! I competed against the great Isao Aoki, and know how revered he was and is. Hideki will also now forever be a hero to his country."

NEXT PAGE: Billy Horschel caught doing the WORST STROP of the season during The Masters