Rickie Fowler is likely to miss his first Masters since 2010 and Sir Nick Faldo believes he's spending too much time shooting commercials. 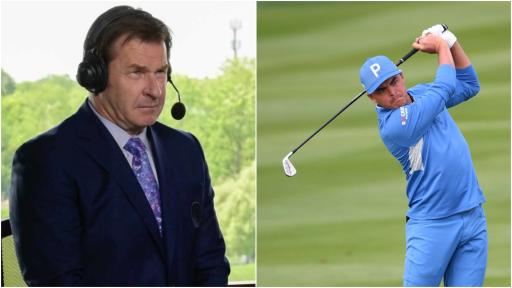 Golf fans have reacted on social media after Sir Nick Faldo fired shots at Rickie Fowler, suggesting that he spends too much time "shooting commercials" as he looks set to miss out on a spot at The Masters next month.

Fowler has slipped to 65th in the world rankings, a position far too low for a player of his quality and if he doesn't climb the rankings quickly, he will miss his first Masters Tournament since 2010.

Winning majors was something that Faldo was pretty good at, claiming six of them during his impressive career and three of them being at Augusta National.

Faldo, now a commentator and analyst for CBS, won his first Green Jacket in 1989 when he beat Scott Hoch in a playoff, before he successfully defended his Masters title a year later, again in a playoff, this time beating Raymond Floyd.

His wait for a third Masters win took six years - in that time Faldo won two more Open Championships - but he made sure a playoff wasn't necessary for a third time, with a dominating five-stroke victory over The Shark, Greg Norman.

Fowler, who burst onto the scene as a young PGA Professional, looked destined to win multiple majors and at the time was often considered the best player to have never won one.

RELATED: Rickie Fowler on the time he "disappointed" Arnold Palmer

Now aged 32, the fan-favourite is still awaiting his maiden major title, but his recent form on the PGA Tour has been tough to watch.

Should he fail to qualify for The Masters, it would of course be a devastating blow to Fowler and his fans, but Faldo took the chance to take a slight dig at the American, suggesting he would use the time off to star in more commercials.

"Good news is if he misses the Masters he can shoot another six commercials that week!" Faldo said on Twitter on Tuesday.

The tweet from Faldo caused quite the reaction from golf fans, so check out some of the responses below.

Be careful, he’ll come for your shoe deal. pic.twitter.com/U2jNup192h