Los Angeles County Sheriff's Department has executed a search warrant to obtain data from the 'black box' in the Genesis GV80 SUV that was crashed by Tiger Woods last week. 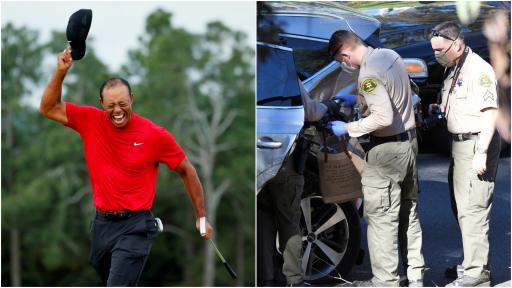 Los Angeles County Sheriff's Department has executed a search warrant to obtain data from the 'black box' in the Genesis GV80 SUV that was crashed by Tiger Woods last week, according to USA TODAY Sports.

The report claims that in order to obtain a warrant for the 'black box', law enforcement is required to establish there was probable cause that a crime was committed, even if it was just a misdemanor.

"We determine if there was a crime. If there was no crime, we close out the case, and it was a regular traffic collision."

RELATED: WOODS IS SAID TO HAVE "NO RECOLLECTION" OF THE CRASH

Schloegl also said there was "no probable cause" to get a warrant to obtain Woods’ blood from him or the hospital he went to with broken bones in his lower right leg after the crash.

Woods' agent Mark Steinberg is said to have been approached for comment but has not yet replied.

Back in 2017, Woods was found asleep at the wheel in Florida and had numerous medications in his system such as sleep aid Ambien, Vicodin, Xanax, Dilaudid and THC, according to a toxicology report.

Woods had been recovering from a fifth back surgery prior to his car crash in Los Angeles last week, and he was hoping to be fit to compete in The Masters in April.

NEXT PAGE: TIGER WOODS TELLS INSIDER - "IT CANNOT END LIKE THIS"