Before this year's Masters tournament, Harold Varner III revealed an incredible story from 2019 about Tiger Woods and one of his close friends. 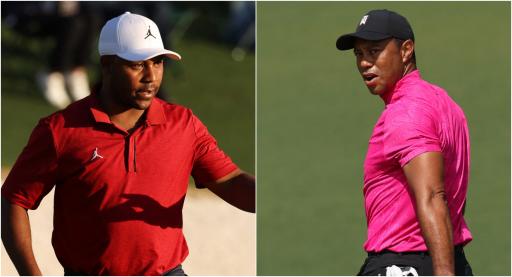 Tiger Woods is one of the most popular players in the PGA Tour circles, not just because of his success, but because of the relationships he builds with so many players.

Harold Varner III, making his debut at The Masters this week, told the media a special story ahead of the tournament about Woods and one of his close friends.

Varner III was asked if he could recollect Woods' first win at The Masters in 1997 on the 25th anniversary. He couldn't but he could certainly remember his most recent victory at Augusta National in 2019.

"I tell everyone the most important one that I've ever seen that I watched and I didn't even watch all of it was 2019," said Varner.

Related: The Masters: Did you notice Cameron Smith line up his putts like this?

Even when Woods was preparing to win his 15th major title, he found the time to send Varner's friend some kind words when he most needed them.

Varner has acquitted himself more than well so far at The Masters. After two rounds, the 31-year-old is 2-under-par and six shots behind World No.1 Scottie Scheffler heading into the final two rounds.

As for Woods, he shot a brave score of 74 on Friday to safely make the cut on 1-over-par. After a 508-day absence from the PGA Tour, this is an incredible effort from the 46-year-old.

He hasn't won the most major titles in golf's history as that accolade belongs to Jack Nicklaus. But Varner believes he is the best golfer to ever pick up a club.

Next Page: Tiger Woods says there will be problems if he "plays golf ballistically"