The Masters: Did you notice Cameron Smith lining up his putts like this?

Cameron Smith appears to have an interesting approach to lining up his putts at The Masters. 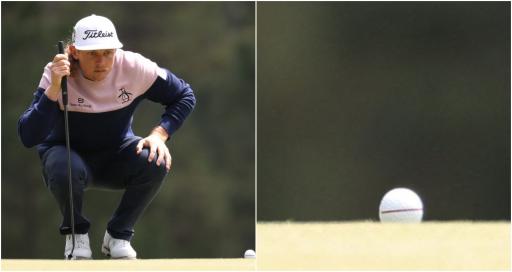 Cameron Smith is now renowned as one of the best putters on the planet and he has already proved as much at The Masters.

He sits inside the top-10 going into the weekend after a frustrating 74 that followed a superb opening 67 that was bookended by two horrid doubles.

Smith, 28, has so far this season looked like a demon with the flat stick in hand. He expects to make his putts. And he does.

Statistically, he is the third best player on the PGA Tour in Strokes Gained: Putting this season behind Tyrrell Hatton and Brian Gay.

That is through 25 measured rounds that has seen him win in Hawaii and memorably The Players Championship at TPC Sawgrass.

When you look at his putting stroke, and particularly his pre-shot routine, it doesn't on the surface seem too complicated.

He takes a look at the putt from all angles. Picks his line. Stands up tall, tucks his arms beneath the rib cage. Rocks his shoulders.

It's a very free stroke when you think about it. He doesn't nervously shuffle about like Billy Horschel.

Nor does he appear to conduct a mathematical equation like Bryson DeChambeau by consulting his green reading book to the last detail.

Smith also doesn't seem to focussed on maintaining his head position like Justin Thomas or Tiger Woods once he's hit the ball.

According to his good friend and PGA Tour winner Marc Leishman, this allows for a much more fluid putting stroke for Smith.

He's free of tension and nerves, Leishman has told the media before.

Though it has to be said, Smith was snapped during Friday's second round at The Masters lining up his putts like this:

His purple sharpie has marked a clear line on the ball but it's...horizontal.

As an amateur hack, this is the sort of thing I do late in the round. I'll mark a line on a ball with good intentions.

Then as the round goes on and my score is increasingly over par, I'll simply place the ball on the green and hit it knowing my fate.

But for someone at the elite level of the game this is an interesting approach from Smith.

After his round, which he was playing in a two-ball, Smith said: "I don't want to wait around, especially around here.

"There's too many thoughts that go through your head. So, yeah, I just want to get up and hit the ball."