Tiger Woods provided an update on what he was expecting and how he feels going into the weekend at The Masters. 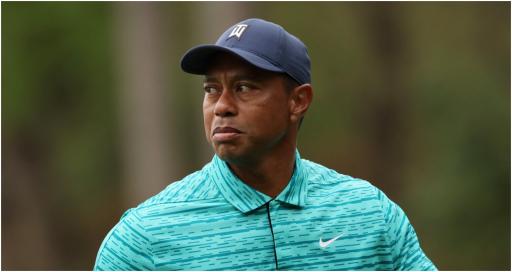 Tiger Woods says he has "given himself a chance" going into the weekend at The Masters but is trying not to play golf "ballistically".

Woods, 46, admitted he was proud of the way he managed to fight back after a sluggish start during his second round at Augusta National.

The 15-time major champion made the cut after manufacturing a hard-fought 1-over par total after 36 holes in really tricky conditions.

Sergio Garcia said he felt like he had gone "10 rounds with Canelo" after battling the wind. Rory McIlroy, too, was pleased to be done.

Woods, on the other hand, has been dealt the hand that he pretty much expected with a lot of soreness. Ice baths are always on the menu.

Was it what he was expecting?

"I expected to be sore and not feel my best for sure. It's the combination. I can walk this golf course," he said.

"I can put on tennis shoes and go for a walk. That's not a problem, but going ballistically at shots and hitting shot shapes off of uneven lies, that puts a whole new challenge to it.

"It was important for me to come up here and play a couple of weeks ago and test it, see what I could do. I paced myself going into this week. I played Sunday nine, Monday nine.

"I was going to take Tuesday off regardless of the rain that was coming in. Again, get the feel of the golf course come Wednesday, and let's go Thursday.

"My team has done a hell of a job getting me ready, getting the body -- after I go ahead and break it out there, they go ahead and repair it at night. You should know this from all the NASCAR. Break it, fix it."

At times Woods has found himself out of position after a few loose drives. He came over the top on one at 18 on his first round.

He's had to manufacture great escapes to save par on more than one ocassion.

Part of the issue is not being able to explode off his right foot in his swing.

He's still able to have a ball speed in the 170s, however, but he's had to make some alterations to his swing.

How much of a swing change has he had to make to compensate for the limited mobility?

"I got rods and plates and pins and screws and a bunch of different things in there. It's never going to move like it used to, so yeah.

"So it's the levels above and below that are going to take the brunt of it.

"If I can't push off, I can't rotate as well, and I'm still -- fortunately, I'm still generating enough speed. My ball speed is at 175-ish when I hit it good, so that puts shearing on the back.

"I already had back issues going into this, and now this kind of just compounds it a little bit."