WATCH: Tiger Woods HITS THE BALL COLLECTOR at The Masters

Tiger Woods is already hitting his targets at Augusta National. 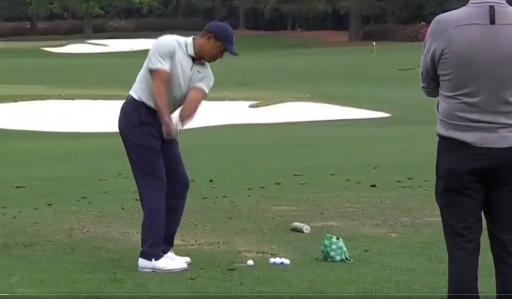 Tiger Woods is back in action at The Masters this week and he is already hitting his targets as proven by his latest range session at Augusta National.

Woods, who declared he can win a sixth Green Jacket on Sunday night, was seen hitting the ball collector vehicle while he was on the range warming up ahead of Thursday's first round.

Related: Bookies slash the odds on Tiger Woods to win The Masters

"I would pay a million dollars to be the guy in the picker," tweeted one golf fan after seeing the clip.

"I bet the driver is telling people about it," tweeted another.

Woods' driver numbers were also looking dialled in during his practice session at Augusta as you can see from the graphic below.

RELATED: TIGER WOODS IS RIPPING HIS TAYLORMADE STEALTH DRIVER AT THE MASTERS

During his Tuesday practice session, Woods was achieving a solid 171mph ball speed.

"For his first tournament back, Tiger is already at the PGA Tour average for ball speed," says GolfMagic Equipment Editor Alex Lodge.

"He is carrying it 10 yards further than the PGA Tour average, too.

"It is clear Tiger has his speed back and has been working hard to achieve that in recent months. It's just a case of whether he can hold onto this for 72 holes of competition.

"It's going to be a long walk for him, which appears the biggest difficulty for him right now."

Next Page: Paige Spiranac responds after hearing Jon Rahm is not going to home school his kids while on the road on the PGA Tour