The Spaniard arrived at Augusta National on Wednesday after he spent time with his new-born son. 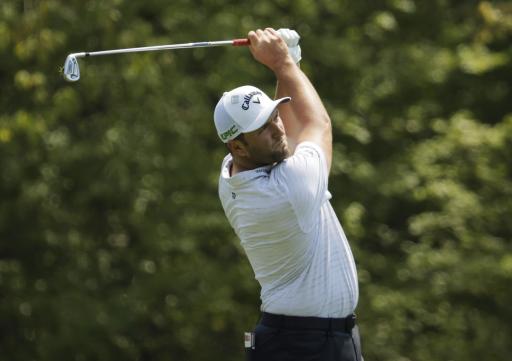 Jon Rahm is ready to take on Augusta National in search of his first major title, despite having only arrived for practice on Wednesday, days after the rest of the field.

The World No.3 became a father for the first time after his wife Kelley gave birth to their son, who the couple have named Kepa.

Rahm had previously warned golf fans not to bet on him at The Masters, as Kelley's due date was the weekend of the first major of the year and he was ready to ditch Augusta as soon as he got the call.

With his son Kepa arriving earlier than expected, Rahm will now be able to play all four days of The Masters - should he make the cut - but he has had little time to prepare for the tournament.

Speaking to the media ahead of the major championship at Augusta, Rahm said it was "refreshing" to arrive at the event having had his mind and focus elsewhere.

"Thursday to Monday didn't sleep much, didn't hit a single golf shot," Rahm said. "Maybe haven't prepared as much as I have in the past, but definitely mentally in a different state.

"A lot of times practising for a major you spend so much time thinking about golf and for four or five days, it wasn't even on my mind, which is kind of refreshing.

"Coming here later than usual, but I'm here ready to compete. I wouldn't be here otherwise.

"For so long I didn't think I was going to be able to be here. I thought Wednesday, Thursday, Friday I was just going to have to get the ticket back home.

"I haven't been here since November. I mean, the course hasn't changed. I might need to spend a little bit of extra time hitting lag putts and hitting some chips because the last time we played here it was a little softer and slower, but tee to green it doesn't really change much."

Rahm plays the opening two rounds alongside Rory McIlroy and Xander Schauffele, with the group teeing off at 15:42 (BST).