Tiger Woods said that the people who visited him during his rehabilitation saw the shocking extent of his injuries, and Justin Thomas was certainly stunned. 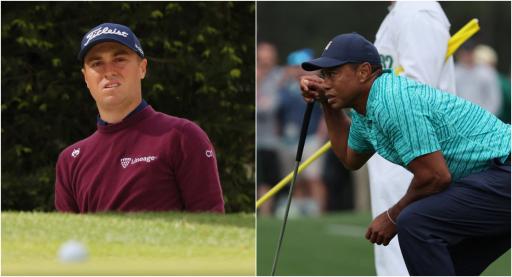 Justin Thomas admitted he was horrified by Tiger Woods' leg injury after his car accident in February 2021.

Thomas is one of Woods' closest friends and visited the 15-time major champion during his rehabilitation and recovery from his surgery.

Woods has before described the 2017 PGA champion as "the little brother he never had" and Thomas is as excited as every golf fan to see Woods back at The Masters.

Thomas recovered well on Friday at Augusta National by shooting a 67 which was the joint-lowest score of the day alongside Scottie Scheffler. He is 1-under-par and seven shots behind his fellow American.

"Horrified is definitely something I would say," Thomas said after his second round in Georgia.

"Obviously I think the world of the guy, and I'm sure y'all are in the same boat. If he is playing, he is the GOAT. He is going to play great, but he actually does it. It's like, wow, it's unbelievable.

"I'm pumped for him. I'm happy for him. I've seen how hard he has worked and seen all the things he has done behind the scenes. Yeah, it's very, very impressive for him to make the cut and be playing as well as he is."

Woods safely made the cut on 1-over-par after he shot a 74 on Friday. He began with four bogeys in his first five holes but he battled back with birdies on the 8th, 10th, 13th and 14th holes.

As for Thomas, he has only finished in the top 10 on one occasion in his six appearances at The Masters. He finished fourth at the 2020 tournament.

The 28-year-old has won 14 times on the PGA Tour but he hasn't tasted success since The Players Championship in 2021.

Next Page: Justin Thomas: "That was far and away the most p****d off I've been"