Tyrrell Hatton after two rounds at The Masters: "I'm not in a good mood"

Tyrrell Hatton vented frustration at himself again after getting annoyed with the flat stick at The Masters. 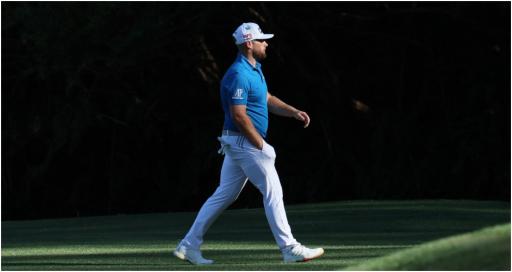 Death, taxes, and Tyrrell Hatton raging at himself on the golf course. This time, his scene was The Masters. His foe? Putting.

The Englishman, 30, did not hold back after two days of pain and mysery at Augusta National on the notoriously glacier-like greens.

Hatton said he "felt sorry" for anyone with worse putting stats than him this week as he admitted: "I'm not in a good mood."

Rounds of 72 and 74 saw Hatton in a tie for 23rd at 2-over par going into the weekend with Scottie Scheffler looking like a deserving World No. 1 who was about to simply dominate the golf world.

Hatton, when asked how he would assess his second round performance, told the media: "Well, I didn't think my score could actually be any worse than what it is, to be honest.

"If anyone has worse numbers than me on the greens this week, I would actually feel sorry for him because my putting this week is absolutely disgusting.

"I hit it lovely yesterday, and then we had a few bad moments today. Obviously, it's tough out there, but I'm not in a good mood. I'm so frustrated with these greens.

"It seems every year I play here, I just never hole putts, and this year has been the same."

He added: "I've wanted bury my putter several times. It's definitely a love/hate relationship, and there's a lot of hate at the moment."

Last year, Hatton had his best career finish at Augusta National when he shot a final round 68 to finish in a tie for 18th.

This is his sixth appearance at The Masters, only missing the cut twice.