Justin Thomas: "That was far and away the most pi**** off I've been"

Justin Thomas was extremely annoyed at his first round performance at The Masters and "needed to be left alone". 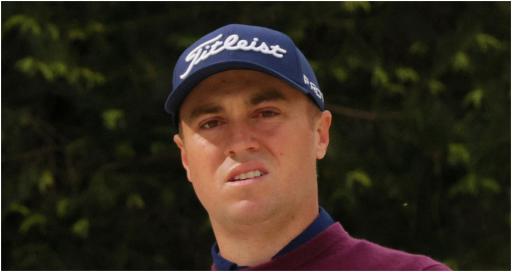 Justin Thomas says he was "the most p***** off" he had been in a really long time after he played his first round at The Masters.

An opening round of 76 saw him at 4-over par and well off the pace but he moved back into contention with a sublime 67 in round two.

Thomas made six bogeys in his first round but just the one during his second 18 holes as he moved under par going into moving day at Augusta National.

The 28-year-old said: "I don't even know how to describe that [the first round]. That was far and away the most pissed off I've been after a round in a really, really long time.

"I don't know. It was just one of those weird days yesterday where I just couldn't get focused.

"But I'm really proud of myself. I very easily could be going home right now, and not only am I not, but I'm in a really good spot going into this weekend."

Thomas said he "needed to be left alone" for a little bit on Thursday afternoon. He decided to vent his anger by spending time with his dog Franklin.

He said: "I played fetch with my dog for llike 45 minutes, and Jill [fiancee] was out there with me. I just kind of sulked and pissed and moaned for about 30 minutes and had some dinner and went to bed. All good."

What exactly happened to Thomas in round one? He was one of the favourites going in and there were lofty expecations on him.

Then it looked like he was falling to pieces.

"I just -- all I could think about was anything other than what I was doing.

"It sucks when you are playing a place like this because you can't do that. You're just looking to see what other people are doing. You're looking at the leaderboards.

"You are looking a couple of holes over. You're thinking about why did I screw up two holes ago instead of just focus on what you are doing like I did today.

"If it was that easy to just kind of flip the switch and get back into it, I obviously would have, but I tried and tried.

"I just felt like I held it together as much as I could through 15 holes and then just bogeyed two of the last three. Just one of those days."

Thomas found himself in a tie for 10th going into the weekend. Scottie Scheffler, the World No. 1 held the 36-hole lead."