The Masters: What we learned from Tiger Woods' press conference

This is everything we know from Tiger Woods' press conference ahead of The Masters. 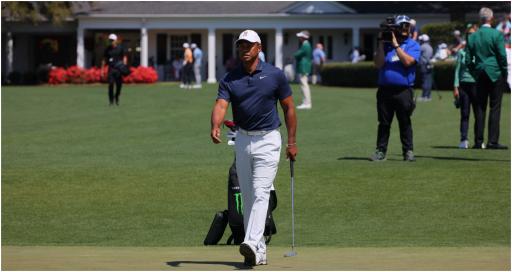 A chipper Tiger Woods faced the media with a beaming smile on Tuesday before The Masters and said: "I feel like I am going to play".

Woods, 46, confirmed he had been in worse situations and still won tournaments as he told of how the pain he has been through he wouldn't wish on anyone.

When it comes down to it Woods is still not officially in, but with a hint of a smile he confirmed that barring a dramatic last second change he will play.

He is scheduled to tee off at 10.34am in round one of the 86th Masters at Augusta National alongside Louis Oosthuizen and Joaquin Niemann.

So what exactly did we learn about from his press conference? Did we learn anything that we didn't already know?

Perhaps there was one thing, but it is hardly a surprise. Woods' remarkable progress has been kept well under wraps. It's the way he would have wanted.

The decision making progress has been very difficult for Woods

Woods said: "It's just a matter of what my body's able to do the next day and the recovery. That's the hard part. Yes, we push it and try and recover the best we possibly can that night and see how it is the next morning.

"It gets agonizing and teasing because of simple things that I would normally just go do that would take now a couple hours here and a couple hours there to prep and then wind down.

"So activity time to do what I want to do, it adds more time on both sides of it pre and post.

"So that has been -- it's not like something I haven't done, but the times have gotten longer on both sides."

He still thinks he can win at Augusta National

It was a simple question put to Woods. Does he actually think he can win? He's not just here on ceremony?

And the response was short from the 15-time major champion.

He doesn't worry about slipping and hurting himself this week

Woods said: "I've got metals in, so I don't have to worry about that. Even with the rain, it doesn't really concern me."

After 14 months, he's just delighted to be in this position

"Thankful. Yeah, very, very thankful. Thankful for just everyone's support, everyone who's been involved in my process of the work that I've put in each and every day, the people I work with, my whole team," he said.

"And just as I was alluding to, all the support from the players out here.

"We're a big fraternity. The amount of texts and FaceTimes and calls I've gotten over the past year have meant a lot.

"To see some of the guys at home, whether I've been out at Medalist, out there playing, to see them again, or to see them yesterday in person and say thanks. I saw a few of them at the Hall of Fame induction.

"I'm sure as the week goes on I'll see more of them. So it's been great.

"Tonight is the night of all nights to see all the guys again and listen to all the chiding and the stuff that I can't ever repeat here and we don't ever repeat, but the fact of what we're able to say to each other is just awesome.

Related: What FootJoy shoes is Tiger Woods wearing this week?

Woods says the FootJoy shoes he is wearing help with feeling more stable, will continue to work with Nike

"Well, I have very limited mobility now. Just with the rods and plates and screws that are in my leg, I needed something different, something that allowed me to be more stable. That's what I've gone to.

"Nike's been fantastic over the years of providing me with equipment and work, and we have worked, we've been working on trying to find something to allow me to do this and swing again.

"We're still going to continue doing it, and hopefully we'll have something soon."

"I don't show up to an event unless I think I can win it. So that's the attitude I've had.

"There will be a day when it won't happen, and I'll know when that is, but physically the challenge this week is I don't have to worry about the ball striking or the game of golf, it's actually just the hills out here.

He doesn't know how many years he has left, but the surgeons and personal trainers said he could play again provided he could endure the pain

"My surgeons gave me a chance, and then my PTs and with my surgeons, they all said that I could do this again.

"Now, it's up to me to endure the pain and all that, but I felt like I could still do this. I don't know how many more years I can do this.

"I was very fortunate to have come back at the end of '17 when I did because I didn't know if I could still do it again at that time, but again, my surgeons gave me an opportunity and my PTs did the same.

"This is kind of the same scenario but a little bit more severe than it was back then."

He will get better, his leg will get stronger, but the mobility is limited

"My movement probably will not get much better. Will I feel better? Yes, I will. I'm going to get stronger, and the whole limb will get stronger.

"But as far as movement, probably not much more. I'm so limited with the hardware in there, I won't get much more."

He is drawing inspiration from Ben Hogan, who also came back from a car crash

"Yeah, what he went through pre -- obviously, he didn't have the technology that we have now, but the amount of hot tubs that he would have to take pre-round, post-round, in the middle of the night, just to be able to get up and swing a club the next day, I certainly appreciate that.

"The treatments have gotten so much better, and I'm very thankful for that because, if the treatments hadn't gotten any -- if I had to go through with my accident, given what had happened to me, during his era, I wouldn't be playing this week, that's for sure."

He still has a sense of humour. What lies trouble him the most? Uphill? Downhill? Side hill?

All of them, said Woods.

"When I decide to hang it up when I feel like I can't win anymore, then that will be it.

"But I feel like I can still do it, and I feel like I still have the hands to do it, the body's moving good enough. I've been in worse situations and played and won tournaments.

"Now, I haven't been in situations like this where I've had to walk and endure what I'm going to try and endure, that's going to be different. It's a different challenge.

"But my back surgeries that I've had before and the stuff I had to play through, even going back to the U.S. Open when my leg was a little bit busted, those are all times that I can draw upon where I was successful, how I've learned to block things out and focus on what I need to focus on.

"That's certainly going to be the challenge this week."

Next page: Tee times and pairings for round one and two at The Masters