PGA Tour's Top 10 LONGEST DRIVERS ahead of The Masters

Bryson DeChambeau, Rory McIlroy and Dustin Johnson will be gunning for Masters glory at Augusta National. Take a look at their INSANE driving distances so far on the PGA Tour this season... 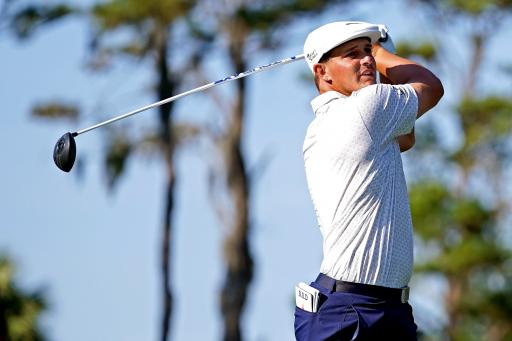 We have seen many of the PGA Tour's biggest hitters enjoy great success at The Masters down the years, and the 2021 renewal is likely to be no different. But let's face it, who is really a short driver these days?!

Power hitters through the years such as Tiger Woods, Angel Cabrera, Adam Scott, Bubba Watson and Dustin Johnson have all slipped on the famous Green Jacket after relying on their prodigious length off the tee.

Little wonder, the PGA Tour's leading driver right now in Bryson DeChambeau is so keen on his chances of landing a second career major on Georgia's hallowed turf.

Other bombers such as Brooks Koepka and Rory McIlroy have come close to Masters glory in recent years, as the latter goes in search of joining an elusive group of players to complete the career grand slam.

Often key moments on the final day at The Masters are decided at the par-5 13th and 15th holes, as the contenders weigh up whether to take on the green in two shots over the water.

Here's a current look at the PGA Tour's top 10 drivers when it comes to distance of those fighting it out to become 2021 Masters champion.

Reckon any of these guys will on Sunday? Judging by the strength in depth of this list, there would appear every chance:

NEXT PAGE: CAUSE OF TIGER WOODS CAR CRASH DISCOVERED BUT POLICE REMAIN QUIET FOR NOW