Rory McIlroy holes incredible bunker shot for birdie at the 18th to shoot his lowest round at Augusta National en route to finishing solo second. 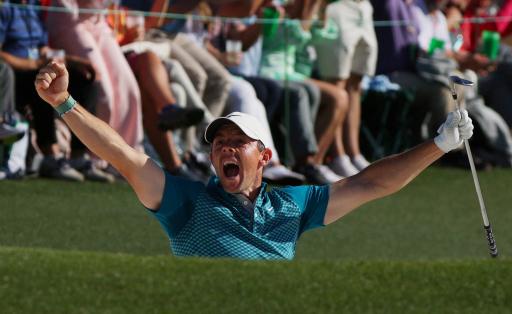 Rory McIlroy brought the house down at Augusta National on Sunday evening as he holed out for birdie from the greenside bunker on the famous 18th hole in the final round of The Masters.

McIlroy splashed his ball out well right of the pin and used the contours on the green to perfection as his ball found the bottom of the cup for birdie and his lowest round in Masters history of 8-under 64.

It left the Northern Irishman at 7-under par for the tournament in solo second and three shots behind leader Scottie Scheffler at the time, before Scheffler pulled away for his maiden major title and a fourth win in his last six starts.

"That was by far my best experience ever at Augusta," said McIlroy.

"I got off to a great start today and kept it rolling. I knew I needed my best ever score to have a chance.

"I shot 65 in the third round in 2018 and I knew I needed to go a bit lower than that. I did by one, it's probably not going to be enough but I can't ask any more of myself.

"I played a really, really good round of golf and maybe I'll come up a couple short, but it's the most fun I've had on a golf course in a very long time."

McIlroy started the final round 10 shots off the pace but he knew there was a low score out there.

He raced out the blocks with a birdie at the par-4 1st and then proceeded to birdie the 3rd, 7th and 8th to go out in 32 shots.

McIlroy then turned for home with a birdie at the tricky par-4 10th and he then sent a towering long iron down the flag at the par-5 13th.

He would convert the eight-footer for eagle to move to 7-under par for the round before capping off his lowest round at Augusta with a miraculous birdie from the greenside bunker at 18.

"I really wanted to post a number, I kept thinking 'why not me/?'" said McIlroy.

"We finally had the conditions where you could get after it and shoot a low one. When I birdied one I thought this could be it today. I stayed aggresive, kept hitting good shots, hitting good putts, played smart around Amen Corner and made my pars and moved on, and then finished like that.

"I'm getting the hang of this place after 14 years of trying. Whatever happens over the next couple of hours, I'll keep coming back and keep trying."

The runner-up finish marks McIlroy's best finish at The Masters, a tournament he needs to win in order to complete the career Grand Slam.

Next Page: Tiger Woods WILL play in The Open Championship at St Andrews this summer