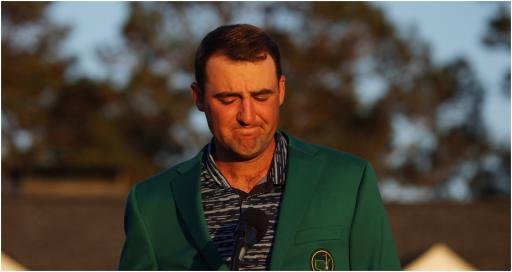 Newly crowned Masters champion Scottie Scheffler revealed he "cried like a baby" on Sunday morning due to stress.

You wouldn't think it by looking at his cool demeanor on the golf course but the 25-year-old had a rough time on Saturday evening.

After a twilight range session in the freezing cold conditions, he went to get some dinner with his wife Meredith.

In the car, he spilt that dinner all over his lap. His wife thought it was the funniest thing in the world. He did not think it was amusing.

As we all know, being the leader means you get to tee off last and you are left alone with your thoughts for hours on end.

Scheffler admitted he handled the evening well - before the dinner mishap - but Sunday morning was completely different.

He said: "You know, last night was pretty easy. I was tired. We went and got some food. I spilled my dinner in the car on the way home, and that was extraordinarily frustrating.

"You can see Meredith is still laughing at me. She thought it was the funniest thing ever; I didn't think it was so funny at the time. Last night was fine.

"This morning was a totally different story. I cried like a baby this morning. I was so stressed out. I didn't know what to do.

"She told me, 'Who are you to say that you are not ready? Who am I to say that I know what's best for my life?'

"And so what we talked about is that God is in control and that the Lord is leading me; and if today is my time, it's my time.

"And if I shot 82 today, you know, somehow I was going to use it for his glory. Gosh, it was a long morning. It was long."

Why exactly did he feel that way?

"I think because it's the Masters. I dreamed of having a chance to play in this golf tournament.

"I teared up the first time I got my invitation in the mail. We were fortunate enough to play here in college, and I love this place. I love this golf course.

"And there's just -- you know, if you're going to choose a golf tournament to win, this would be the tournament I would want to win.

"You don't know how many chances you're going to get.

"And so having a chance, you know, I think I had a five-shot lead on Friday and then a three-shot lead going into today, I don't know if you get better opportunities than that.

"You don't want to waste them.

"The human condition is to make things bigger than they really are.

"And years from now I would say people may not remember me as a champion, and that's fine.

"But in the moment, you think it's a lot bigger deal than it really is."

Scheffler won the 2022 Masters with a final round of 1-under par 71 after he missed two short putts at the 18th hole to finish on 10-under par.

The 25-year-old finished three shots clear of Rory McIlroy, who shot an extraordinary bogey free 7-under 64.

Australia's Cameron Smith, paired last with Scheffler, finished on 4-under par after he came unstuck at the famous par-3 12th hole with a horrid triple bogey to end his chances.

Scheffler added: "I don't think anything has sunk in at the moment. My head is skill kind of spinning. I was so focused for so long this week.

"Major championship golf is brutal and especially around a golf course like this and the conditions we played it in; you can see the scores, this golf course was not playing easy this week.

"It was such a mental grind and you know winning this golf tournament, I'm so humbled to be here. I was just -- I'm just glad to be a part of the field.

"I'm glad to be able to come out here and have a chance to compete. To be able to win this tournament, I can't say enough about it."