Scottie Scheffler romps to first major victory at The Masters

Scottie Scheffler carded a 1-under-par 71 to hold off a rallying Rory McIlroy to win his first major title and secure the fourth win in his last six events on the PGA Tour. 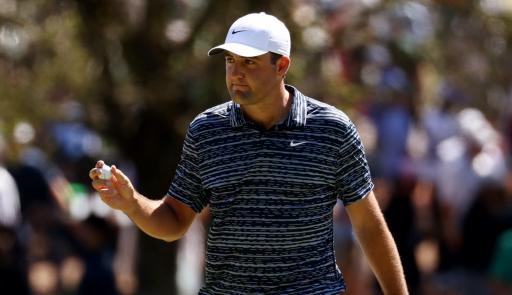 Scottie Scheffler has become a major champion by winning The Masters in dominant fashion by three strokes.

The World No.1 hadn't won an event on the PGA Tour at the start of February, but he is now a four-time winner after carding a 71 on Sunday at Augusta National.

Rory McIlroy pushed hard in the final round and his score of 8-under-par tied the lowest ever round on a Sunday at Augusta National. He finished second and the Green Jacket remains the missing piece of his major grand slam.

"I may have looked calm on the outside, but as Hideki knows, it's a long and tough day and I just tried to keep my head down and execute shots," Scheffler said in the Butler Cabin.

"I was fortunate to put myself in a position where I was in control of the tournament today, so I didn't have to worry about what anyone else was doing out there. I knew if I took care of my stuff and played good solid golf, I would get the job done.

"That was the goal going into today, it was to keep my head down and I did see at one point that Rory posed 7-under. Cam and I were getting tight there he birdied 11. I made a huge par putt there and after that, he made a mistake on 12."

Scheffler experienced some early panic as Smith burst out of the blocks. The Australian birdied the first two holes to reach 8-under-par and the gap became only one.

A pivotal moment came on the 3rd hole. Both leaders went left off the tee box and Scheffler came up well short with his approach. However, so did Smith and Scheffler dramatically chipped in for an unlikely birdie.

Related: What is Harry Kane doing in the Sky Sports studio at The Masters?!

A birdie at the 14th and a four-shot lead

Smith, often so solid around the greens, bogeyed and Scheffler received a two-shot swing in his favour to retain a three-shot lead on 10-under-par.

Scheffler added a birdie on the 7th hole and with that, he held a four-shot lead over Smith with nine holes to play after The Players champion also birdied the 7th hole.

McIlroy began the final round on 1-over-par and he made four birdies on his front nine to reach 3-under-par for the week. He then chipped in for a birdie at the 10th hole to give Scheffler something else to think about.

Both Scheffler and Smith bogeyed the 10th hole but with a great birdie at the tricky 11th hole, Smith reached 7-under-again and within three shots of the World No.1.

But everything soon fell apart for the man born in Brisbane. He cut his tee shot on the par-3 12th hole into the water and made a triple-bogey six which completely ended his chances.

McIlroy continued to rally. The four-time major champion eagled the 13th hole to get within five shots of the lead and he incredibly holed out from the greenside bunker on the 18th hole to post a 64.

The Northern Irishman reached 7-under-par, but the nerveless Scheffler birdied the 14th and 15th holes to extend his lead again to five shots on 12-under-par.

Scheffler made a baffling double-bogey on the final hole, four-putting from nowhere but it was still enough for a comfortable three-shot victory.

Jason Day was the last player to win four times in six starts on the PGA Tour in 2015 and Scheffler carded a final-round score of 71 for another convincing win. He is only the fifth player to win The Masters as World No.1.

Next Page: Tiger Woods WILL PLAY at The Open Championship after Masters return