Tom Watson joined Jack Nicklaus and Gary Player for the first time as an honorary starter before the first round of The Masters. 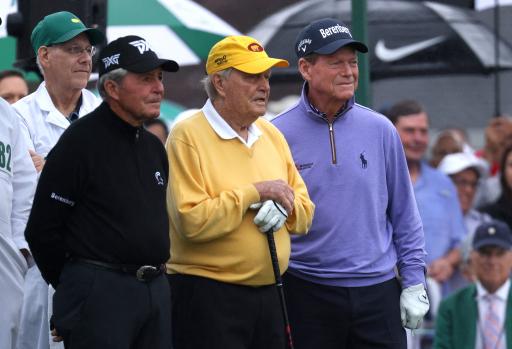 Tom Watson was part of the honorary starter's ceremony for The Masters on Thursday, joining Jack Nicklaus and Gary Player in the annual tradition.

Watson made his debut as part of the ceremony which has featured the likes of Byron Nelson, Sam Snead and Arnold Palmer who sadly died in 2016.

Lee Elder joined Nicklaus and Player in 2021 and this year, Watson proudly joined his two good friends. Between them, they have won 11 Green Jackets.

"I would like to say how honoured I am to be here with Gary and Jack," said Watson just before he hit his drive after Nicklaus and Player.

"I've watched this ceremony many times in the past with Arnie, Gene Sarazen, Byron Nelson and to be a part of this thing, I am truly humbled."

Player, a three-time winner of the event, is known as one of the best global ambassadors for the game. He wore his iconic all-black outfit as he hit his ceremonial shot.

Nicklaus joked with the crowd as he teed up his ball. The Golden Bear won here six times in his career, most famously in 1986 when he won the championship at the age of 46.

Below is footage of each of the honorary starter's tee shots:

Gary Player, three-time Masters champion, has been part of the Honorary Starters since 2012. #themasters pic.twitter.com/2HNE2zImYx

63 years since he played in his first Masters, Jack Nicklaus returns once again to be part of the Honorary Starters. #themasters pic.twitter.com/pf7vKzE3Tz

With 15 top-10 Masters finishes and a legacy that will last a lifetime, Tom Watson joins the Honorary Starters. #theMasters pic.twitter.com/AXMu9McRop