Gary Player wore his iconic all-black jumper during the honorary starters' ceremony at The Masters with the Golf Saudi logo on his collar. 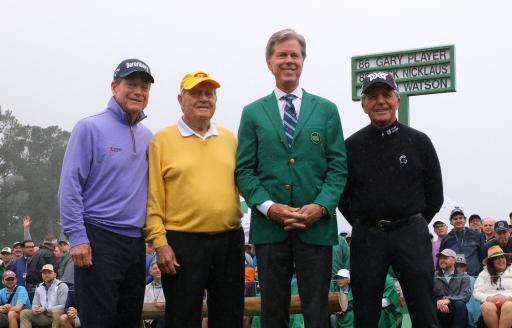 Gary Player wore his iconic all-black jumper with a Golf Saudi logo on the collar during the honorary starter's ceremony at The Masters.

Player was up first to tee off during the annual tradition followed by Jack Nicklaus and Tom Watson who made his debut at the ceremony.

The popular South African, who won three Green Jackets in his incredible career, had the Golf Saudi logo on the collar of his jumper at Augusta National.

This was a very interesting observation that was also made by a golf fan at the WGC Match Play, when Kevin Na wore the same logo on his shirt at Austin Country Club.

As @Coach_Mackay_ pointed out, Gary Player is rocking the Golf Saudi logo on his shirt today. pic.twitter.com/ychT7MV993

Player, 86, is known as one of the greatest global ambassadors for golf and he is an official ambassador for Golf Saudi, helping to implement a future vision of the sport in Saudi Arabia.

Since Golf Saudi's inception in 2018, Player has been extremely supportive of the organisation and he attended the Saudi International in 2020.

Golf's development with backing from Saudi Arabia has been one of the most controversial stories in the last 12 months. It has culminated in the LIV Golf Invitational Series, an eight-event tour that begins in June.

Commissioned by two-time major winner Greg Norman, the first event will take place at the Centurion Club in the UK and there will be $20 million on offer at each event.

As a result of his collusion with the Saudis and his strong words on their leadership, Phil Mickelson has taken some time away from the PGA Tour and will not be playing at The Masters.

Next Page: Louis Oosthuizen holes MONSTER PUTT in Par-3 Contest at The Masters