Sungjae Im's father hit a shot on the 9th hole at The Masters Par-3 Contest which stunned the crowd and it certainly stunned the PGA Tour star himself. 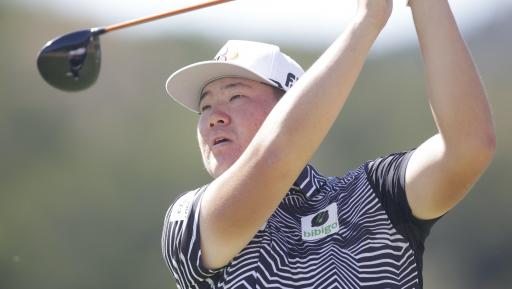 Sungjae Im and his father created a moment of pure joy during The Masters Par-3 Contest on Wednesday luckily before play was halted due to bad weather.

The 9th hole on the short course is brilliant. It is a short shot in terms of yardage but it is an island green with a small target, but not for Im's father Ji Taek.

He took a swipe at the ball, almost Scottie Scheffler style with his leg movement, and as soon as he hit it, Im started laughing.

He clearly didn't expect much from his father, but he should have. His ball landed and stopped about five feet from the pin which saw jubilant scenes on the tee box.

Is it too late to add Sungjae Im’s father to the Masters field? pic.twitter.com/eMeaGoMYl8

This footage above is exactly why The Masters holds its famous Par-3 Contest. It is a chance for the stars of the PGA Tour to share some memories with their loved ones at Augusta National.

It is an opportunity for the players to walk the fairways with a carefree attitude ahead of the famous tournament which kicks off today in Georgia.

Im and his family were almost celebrating for real at the rescheduled Masters in November 2020. The talented South Korean finished second behind Dustin Johnson.

The 24-year-old picked up his second PGA Tour win at the very beginning of the 2021/2022 season. He won the Shriners Children's Open to build on his win at the Honda Classic in 2020.

Im is due to tee off alongside Marc Leishman and Webb Simpson in the afternoon, which will be at least half an hour later than expected due to thunderstorms on Thursday morning.

Next Page: The Masters to be delayed on first day due to thunderstorms