What is Harry Kane doing in the Sky Sports Golf studio at The Masters?!

Spurs and England striker Harry Kane rocks up for the final round at Augusta National. 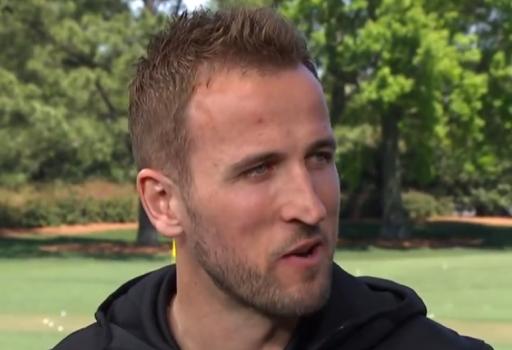 Spurs and England striker Harry Kane rocked up to the Sky Sports Golf studio at Augusta National for the final round of The Masters this evening, much to the surprise of UK golf fans.

Just minutes after the Man City and Liverpool game ended in a 2-2 draw over on Sky Sports Main Event, the majority of viewers switched straight over to the golf coverage to see the England captain gracing our screens.

"When I'm on the first tee in front of a crowd I get more nervous than when I'm playing football!"

Harry Kane confirms he has the same fear at the first tee as the rest of us! pic.twitter.com/kB8IKHtMoJ

Kane, an avid golfer with a 4-handicap, gave his thoughts about The Masters so far and how he quite fancies Cameron Smith to topple World No.1 Scottie Scheffler and win The Masters.

He also said he gets more nervous on the first tee when he is in a Pro Am event than when he is out on the field playing for England and Tottenham Hotspur.

"When I'm on the first tee in front of a crowd I get more nervous than when I'm playing football!," said Kane.

Harry Kane's backing Cam Smith to come from behind and win the Masters on the final day an Augusta National pic.twitter.com/E22Fgh65RU

Related: Harry Kane is likened to Tiger Woods by commentator

Kane jetted straight over to Augusta National for the final round of The Masters after helping Spurs defeat Aston Villa 4-0 in their Premier League match on Saturday evening.

He got two assists in the match but also got a yellow card in injury time.

Spurs are currently in fourth place in the Premier League as they look to book their place in the Champions League for next season.

Arsenal are tucked three points behind them but they have a game in hand.

West Ham and Manchester United are also in the running for the top four but they are now six points behind Spurs.