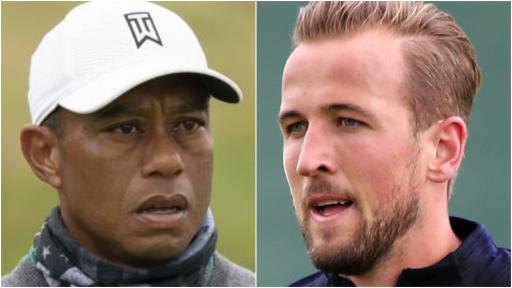 Sinclair, who also played football for England, Blackpool, QPR and West Ham, claimed both Kane and Woods have struggled to cope well with major setbacks in their careers.

Since being linked with a big money move to Manchester City earlier this summer, Kane has only scored one goal for Spurs in his last seven Premier League matches.

And that is simply not good enough in the eyes of Sinclair.

“Kane is a shadow of himself. This summer, he said he wants to leave #THFC.”

“People have responded by digging him out! He seems to have crumbled under it.”

“Tottenham are playing with 10 men!”

Hideki Matsuyama hits shot of the year so far to win Sony Open
Bryson DeChambeau on Cobra Golf: "We came to a bit of a sticking point in 2021"

"Kane for me is a shadow of himself... some people struggle when they have this kind of situation around them," said Sinclair on talkSPORT earlier today.

"When Tiger Woods had a bad problem, he seemed to shoulder it so bad. He was squeaky clean before that, the world portrayed him as a superstar that doesn’t put a foot wrong. All of a sudden it all came crashing down and his rehabilitation took years and years and years.

"Harry Kane’s always been portrayed as a really good professional, he got all the adulation he deserves and then this summer he’s suggested to Gary Neville he wants to leave. The way the public and the media have responded to that has been by digging him out a bit. He seems to have crumbled under it.

"I would almost say Tottenham are playing with ten men. He’s so ineffective for the team."

“10 games to be in the job, the players should be absolutely embarrassed! I think that’s disgraceful from #THFC.”

Kane, who is an avid golf fan, was last in action for Spurs when losing 3-0 at home to Manchester United on Saturday night, and it was a result that ultimately cost manager Nuno Espirito Santo his job as he was sacked by the board.

Fellow talkSPORT commentator and ex Spurs midfielder Jamie O'Hara was in agreement with Sinclair where Kane is concerned.

"Harry Kane was really bad, a dreadful performance, his head was down, he lacked any sort of edge," said O'Hara.

"He doesn't want to be there, let's be honest."

He added: "He is totally out of sorts, he's not in the right areas, I don't think he's in the right frame of mind to be playing at the moment.

"Drop Kane, take him out of the firing line."

NEXT PAGE: TIGER WOODS' 17 YEAR-OLD GOLF SWING IS SO PURE - WATCH THIS!