You would expect to see a shot like this from an amateur golfer, not from a major winner and former World No.1 in Justin Thomas. 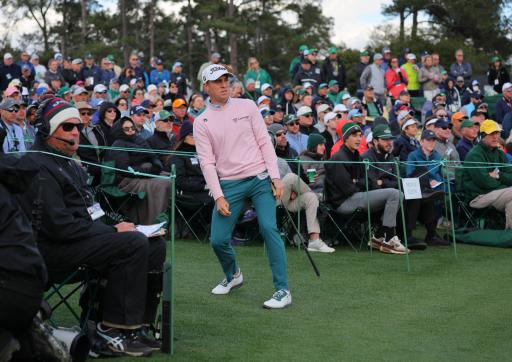 When Justin Thomas was practising on Saturday at The Masters, he hit one of the most strange and bizarre shots you will ever see from a PGA Tour player.

Thomas was hitting some shots on the driving range at Augusta National and his caddie Jim "Bones" Mackay was stood observing.

With the 28-year-old's next swing, he appeared to top his shot with his fairway wood almost completely sideways, sending the ball bouncing across the ground.

The 2017 PGA champion seemed unphased by the awful mishap and he just chatted away to Mackay, who caddied for Phil Mickelson for 25 years.

It is unclear as to what actually happens when the 14-time PGA Tour winner swings down. As he strikes the ball, it looks as though one ball flies forwards and another scuttles away to the right.

Whatever happened, it is a shot you would usually associate with your average weekend golfer at your local golf club and not a former World No.1.

He will have to put these sorts of shots behind him if he is to win his second major championship at The Masters on Sunday. Thomas trails Scottie Scheffler by eight shots with 18 holes left.

Thomas shot a 72 in the third round to remain on 1-under-par for the week. The highlight of his week so far was his round of 5-under-par on Friday which brought him back into contention after a 76 on Thursday.

He has an uphill task to catch his 2021 Ryder Cup teammate Scheffler, who is on course to win his fourth event in his last six starts and his maiden major title.